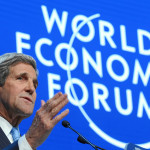 Speaking at the 45th World Economic Forum Annual Meeting in Davos-Klosters, Switzerland, US Secretary of State John F Kerry has vowed that the civilised world will never bow to the threat of terrorism. “The 20th Century was defined by the civilised struggle to uphold the values of freedom, democracy and the rule of law,” said Kerry. “We will not be derailed by criminal anarchists who illegitimately claim a religious cause.”

The first step, explained Kerry, is to defeat Daesh (the rebel group also known as ISIS). “They are better armed, better trained and have claimed more ground than any other terrorist group in history,” stated Kerry. “Daesh represents a threat to individual nation states as well as the entire region.”

Much has been achieved by the coalition of 60 partners formed to defeat Daesh, but the speed of progress is not yet fast enough. To succeed, Kerry asserted that Iraq also needs to enhance outreach efforts to its Sunni population.

Referring to Daesh-controlled areas that are languishing, as well as specific atrocities, Kerry explained that the world needs to see the terrorist group as it is rather than as it claims to be.

“To effectively combat violent extremism over the longer term, we need to better understand the underlying conditions,” said Kerry. “We cannot change minds without knowing what’s in them.”

This understanding, he emphasised, is not the same as acceptance. “There are no grounds of religion, ideology or politics that will ever justify the terrorist atrocities we see around the world,” said Kerry.

“Eliminating terrorists we confront today only solves part of the problem. We need to transform the very environment from which terrorism and fundamentalism arises. We need to take the longer term view, identify vulnerabilities early and do more to both counteract and prevent radicalisation.”

Kerry concluded his address on an optimistic note, citing historic international co-operation in the battle against Ebola, new trade pacts, progress towards an international climate change agreement and steps towards a peaceful resolution of the Iran nuclear negotiations.

“Freedom itself was attacked”

“It wasn’t only France that was attacked – freedom itself was attacked,” said President François Hollande of France. “It is the very foundation of our society which has found itself under assault.” 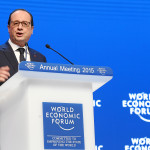 Like Kerry, Hollande was speaking at the 45th World Economic Forum Annual Meeting in Davos-Klosters. The President expressed the gratitude of the French people for the exceptional international solidarity shown in the aftermath of the recent attacks in Paris.

“The sources of terrorism cannot go unnamed,” Hollande stressed, referring to the Jihad movement, ISIS and Al-Qaeda. “Terrorism fuels itself by way of illicit flows of drugs, money and people. Terrorists are also using the Internet as a weapon of indoctrination, manipulation and confusion.”

Hollande called for an international shared response to terrorism by both Governments and businesses. “Europe must strengthen its border protection, enhance its tracking capabilities and invest in cyber defence and cyber security,” insisted Hollande.

Hollande feels the international community needs to do more to resolve existing conflicts and stabilise simmering global ‘hotspots’. “Every time the world lets a conflict linger then terrorism flourishes,” he explained. “France will always be present. Whenever it can act, it will.”

According to Hollande, France is determined to maintain its critical place in the world in the context of international relations as well as in the spheres of technology and industry. “The economy is a key determinant of security. Current economic growth is too weak and unemployment is too weak.”

Undermining growth is financial instability, geopolitical tensions and inequality. In this regard, Hollande stated that the latest ECB decision is welcomed. “It compels us to be more daring and to release the brakes on growth.”
Al-QaedaCounter-TerrorisCyber AttackDaeshFinancial InstabilityFranceFundamentalismGeopolitical TensionsIdeologyInternetIranIraqISISParisPoliticsPresident François HollandePro-Activ PublicationsRadicalisationReligionRisk UKsecurityTerrorismTheSecurityLionUS Secretary of State John F KerryViolent ExtremismWorld Economic Forum
0 comment
0
FacebookTwitterPinterestLinkedinEmail