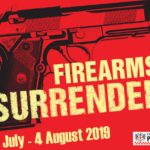 The City of London Police, in partnership with the Metropolitan Police Service, is appealing for people to hand over their illegal or unwanted guns during a national fortnight of firearms and ammunition surrender. The national surrender initiative is being co-ordinated by the National Ballistics Intelligence Service and is running from Saturday 20 July to Sunday 4 August. Bishopsgate Police Station is the designated station for people to surrender weapons and ammunition in the City.

During the two-week period, those handing over firearms will not face prosecution for illegal possession and can remain anonymous. However, the public should be reassured that the police will continue to vigorously investigate criminal offences linked to any firearm recovered. 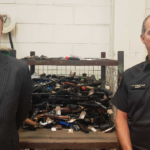 Chief Superintendent Glenn Maleary from the City of London Police said: “This two-week surrender is a campaign dedicated to clearing dangerous firearms from our streets. By people handing in firearms and ammunition to the police, together we can avoid weapons falling into the wrong hands. Too often, there are anecdotes about friends, families and partners being asked to look after firearms for someone else. These individuals often believe that they will not be arrested or prosecuted on the basis that it’s not their gun and they have no intention of using it.”

Maleary continued: “If someone asks another individual to carry or conceal a weapon for them, they’re shifting the responsibility and risk to that person. If that person is then caught in possession of a firearm they will be jailed for a minimum of five years. If convicted of possessing a firearm with intent, the sentence will be much longer.”

In conclusion, Maleary added: “This surrender will provide members of the community with a safe place to dispose of any firearms or ammunition they have in their possession. This includes registered weapons that they no longer want, antique weapons for which the licence has expired and illegal weapons such as imitation firearms, air guns, Tasers, stun guns and CS gas. Each firearm we retrieve helps to reduce the threat of gun crime in London.”