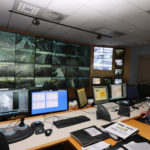 AMG Systems has been commissioned to help digitise the traffic monitoring system for newly-extended hard shoulder bus lanes on Belfast’s main motorways in order to make the system more efficient, secure and reliable. A new IP-based CCTV system was being installed as part of the extension project, so the underlying fibre network needed to be upgraded in order to handle the high-grade images being transmitted back to the city’s Traffic Information and Control Centre (TICC). The upgrade helps to enhance passenger journeys by improving the quality of real-time information sent to traffic management teams.

Working with Juniper Networks (the specialist in secure, Artificial Intelligence-driven networks), AMG Systems has brought the IP-driven CCTV project together across numerous Government agencies and private construction contractors to create a cost-efficient and robust solution for Belfast’s M1 and M2 motorways.

The Northern Ireland Department for Infrastructure (DfI) awarded a tender to Graham Construction to work on the extension of hard shoulder bus lanes along the M1 and M2 motorways, intended to improve journey times and service reliability for bus passengers without affecting general traffic flows. The scheme was designed by DfI consultant Aecom, who also carried out site supervision and project manager roles during construction. The work included the provision of new and upgraded PTZ IP-based CCTV cameras for traffic monitoring purposes.

Graham opted to use Hikvision PTZ IP video cameras – installed by Chubb – for traffic monitoring, but connecting them to the Pelco system in use at the TICC wasn’t as straightforward as it at first seemed, which is where AMG Systems and Juniper Networks came in.

“On each of the two motorways, the existing fibre network had only two spare fibres, so all the images had to be combined on to the two, allowing for a resilient ring,” explained consultant Jo Hopkins of Highways Consulting. “This meant that if one fibre were to break, the other would be able to transmit all the images. The existing cameras on the network were analogue, but we took the opportunity to install digital cameras. This reduces the number of times the images are sampled and converted from analogue to digital and back again, which subsequently improves the quality of the image.” 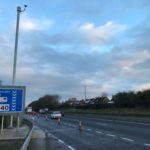 Hopkins worked with Graham on the project, explaining that AMG Systems was asked to provide a reliable and cost-effective means of connecting new cameras to the existing fibre network, bringing the images back to the Traffic Control Centre in Belfast. “The task itself was straightforward, but the integration into an existing live system made the project more complex,” stated Hopkins.

Hopkins and AMG Systems’ business development director Sara Fisher worked to address the network challenge, which included upgrading from analogue to IP cameras for the first time on the Belfast motorways. The network design uses nine AMG Systems switches on the M1 fibres and 15 switches for the M2.

At the TICC’s Control Room, there are a further four AMG Systems switches which allow the IP cameras to connect to the existing Pelco monitoring equipment.

Fisher explained that the Control Room network connection was further complicated as the TICC’s existing system called for the use of multi-casting and VLANs. An existing firewall also had to be factored-in. “The most appropriate interface in this case was Layer 3 POE switches from our partner Juniper Networks,” stated Fisher.

A DfI TICC representative informed Risk Xtra: “The joint network design by AMG Systems and Juniper Networks has met the challenge presented to them in upgrading our hard shoulder bus lane cameras from purely analogue to IP and, at the same time, has provided a resilient network intended specifically for the task. AMG Systems’ post-sales service and advice has also proven to be extremely helpful.”