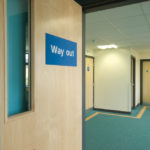 The British Woodworking Federation (BWF) has been forced to highlight to local council leads that the delay in replacing faulty fire doors is, frankly, too slow. This is especially relevant after the Ministry of Housing, Communities and Local Government (MHCLG) confirmed that timber fire doors exceeded the required 30-minute fire performance standard. The recent results from the MHCLG have confirmed that timber fire doors are high-performing compared to glass-reinforced polymer (GRP) doors and readily available.

BWF CEO Helen Hewitt is “very concerned” the mistakes that led to inadequate fire doors being installed in Grenfell Tower and elsewhere will persist unless decisive action is taken.

Kensington and Chelsea Council recently claimed that it has been unable to replace the 4,000 fire doors within its housing stock due to a lack of ‘reliable products’. This was closely followed by Brighton and Hove Council’s announcement that thousands of Manse Masterdor fire doors – those that have failed 30-minute fire resistance tests – are installed throughout its multi-occupancy properties, but are yet to be replaced.

Furthermore, a major piece of investigative work by Inside Housing found that, among the 44 councils with non-compliant doors throughout their properties, half are yet to replace a single door.

These non-compliant fire doors are not being replaced immediately because councils have had little actionable guidance as to which doors are safe to use and how replacement costs should be covered. This has been in part due to the ongoing MHCLG investigation into the burn time of fire doors.

On 18 July, James Brokenshire (former Secretary of State for the MHCLG) announced the results of the investigation, saying that he was “pleased to report that all [timber fire doors] have succeeded in meeting the required 30-minute fire performance standard”. He went on to say that an expert panel had “concluded that they do not believe there is a performance concern with timber fire doors across industry, where they are purchased directly from the manufacturer and produced to specification.”

The MHCLG investigation found that all timber fire doors met required standards, exceeding the minimum 30-minute burn time requirement. This is in direct contrast to GRP foam-filled fire doors (the type recovered from Grenfell Tower and which initiated this investigation), three-quarters of which failed the MHCLG tests in results published earlier this year.

Hewitt has told councils: “To suggest that quality, compliant fire doors are not available and ready for installation is simply untrue and must stop being used as an excuse for delaying replacement. For over 22 years, the BWF’s Fire Door Alliance scheme has ensured the quality, safety and traceability of fire doors through third party certification. The scheme’s vision is that every fire door or fire doorset sold in the UK meets and exceeds required standards throughout its service life. Of course, correct installation and maintenance play a vital role.”

Hewitt continued: “We would actively encourage those responsible for the fire safety of buildings to review the test and certification documents that support the performance of their fire doors to ensure people’s lives are not put at risk. If any readers of Risk Xtra responsible for fire safety within their host organisation require any further information please don’t hesitate to contact me.”

A copy of the letter was circulated to media outlets as the BWF believes that education across the public sector and among the general public is “the only way” in which to address this serious issue.