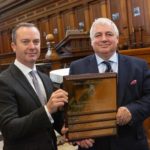 Businesses from the North West region gathered at St Ann’s Church in Manchester on Tuesday 8 October for the annual security event that is ‘Manchester Security: Safe and Secure for Business’. Organised by the Manchester City Centre Crime Prevention Panel with the support of Greater Manchester Police, Manchester City Council and Atmaana Business Consulting, this event provides a platform to inform businesses about security issues facing the region.

For her part, Baroness Ruth Henig CBE spoke about the importance of front line security in keeping the country safe, while chief inspector Zac Fraser delivered a short overview of policing for the city centre.

The event also hosted the presentation of the GMP Business Watch Co-ordinator of the Year Award which was presented to David Perkin, chair of the Manchester Pub and Club Network by Russ Jackson.

Perkin was instrumental in helping to set up the Manchester Pub and Club Network in 1989 and, together with other members, helped develop the first pager system for licensees which later developed into the Nitenet radio system. Perkin has worked tirelessly to increase safety and security within the night-time economy and has liaised closely with city council licencing officers and the Greater Manchester Police.

Commenting on the award, superintendent Chris Hill said: “For 30 years, David has demonstrated his commitment to the Manchester Pub and Club Network and to colleagues within the industry. Under his leadership as chair, he provides a platform for the dissemination of information and intelligence which is absolutely vital in keeping the night-time economy safe. The support David provides during major sporting and social events helps to provide a safer night-time economy for all.”

Commenting on the event, Paul King (chair of the Manchester City Centre Crime Prevention Panel) stated: “We’re delighted by the response that this event receives each year and would like to thank our event sponsors SecuriGroup, SelectaDNA and 4Sight Imaging for their support in 2019.”