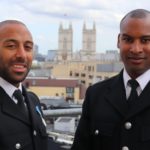 Two British Transport Police officers have been awarded medals by Her Majesty The Queen for their heroic actions during last year’s London Bridge terrorist attack. PC Leon McLeod was awarded the Queen’s Gallantry Medal, while PC Wayne Marques has received the George Medal.

On 3 June 2017, three terrorists carried out an attack on members of the public at London Bridge, resulting in eight people being killed. PC Wayne Marques was seriously injured as he ran towards the attackers and confronted them, armed only with his baton.

His colleague, PC Leon McLeod, was with PC Marques that night. He ran after the attackers and gave vital First Aid to injured people, helping to carry them to safety despite the danger posed to himself.

PC Leon McLeod said: “It means the world to me to stand in front of Her Majesty The Queen to receive this unbelievable honour. I never thought I was being courageous. I was only trying my hardest to help those who were so critically injured. I’ll never forget what I saw that night, but I will also not forget the bravery of every emergency responder. Receiving this honour is a poignant moment in the shadow of a brutal and shocking attack where innocent people lost their lives.”

PC Wayne Marques stated: “I am only able to stand here today thanks to the inspirational work of my therapists, family, colleagues and friends. During the early dark days, you were all there for me, helping me to regain my strength and reach a position where I could return to work. It was such a privilege to stand in Buckingham Palace in front of Her Majesty The Queen and receive the George Medal. I never expected my policing career to come to this point.”

PC McLeod and PC Marques were honoured alongside PC Charlie Guenigault from the Metropolitan Police Service, who was also injured during the London Bridge terrorist attack.

The Commissioner of the Metropolitan Police Service, Cressida Dick, said: “That summer night, while out with friends, Charlie ran towards danger, simply intent on protecting fellow officers and members of the public. Charlie’s bravery undoubtedly helped others. Despite suffering serious injuries, he continued to act without a single thought for himself. I know that I speak on behalf of all of my officers and staff when I say how immensely proud we are of Charlie.”

PC Guenigault observed: “I am so honoured and humbled to receive the George Medal. I hope that I have done my friends, family, colleagues and the nation proud. I would like to thank everyone who has helped me throughout the past year, and especially those who helped to save my life.”

The gallantry list citation added: “PC Guenigault was off duty when he showed exemplary action in response to this terrorist attack. He tried to protect fellow police officers and members of the public by distracting and attempting to stop the terrorists. He placed himself in danger and was aware of the possibility of serious personal injury.”