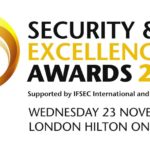 No less than 20 British Security Industry Association (BSIA) member companies were recognised for their commitment to providing top class security products and services at this year’s Security and Fire Excellence Awards, held at the London Hilton Hotel, Park Lane on Wednesday 23 November.

The event saw BSIA members shortlisted in 19 of the 28 categories, with four members receiving accolades in their respective groups. The awards – which are organised by UBM EMEA and supported by IFSEC International and FIREX International – are now in their 18th year and serve to recognise the outstanding people, projects and technology that grace the security sector.

This year, the BSIA was proud to sponsor the award for Security Project or Installation of the Year, with security company SPIE receiving the accolade for its project entitled ‘Securing Safety with Spend to Save’.

James Kelly, CEO of the BSIA, was one of the adjudicators on this year’s extensive Judging Panel. Speaking about the awards, Kelly commented: “There was a huge amount of security talent to choose from this time around, with nominees demonstrating their commitment to ensuring the UK’s private security sector continues to thrive and develop in a positive direction. I was also proud to see so many BSIA member companies being shortlisted this year, showcasing the wealth of experience our members have in a variety of specialisms, including contributions to standards, technological developments, customer care and collaboration.”

The Peter Greenwood Award (a Fire and Security Association Award) was bestowed upon Andy Gilmore of BSIA member AAI Security. Speaking about his accolade, Gilmore enthused: “I was totally humbled when I learned that not only had I been nominated for the Peter Greenwood Award, but that I had won in the face of strong competition from people who, in my opinion, are more worthy than me. There’s no doubt that the electronic security sector has been a passion of mine for more years than I can recall. I’m so very pleased that my peers feel my input has been to the benefit of all.”

BSIA member company Mitie Total Security Management took home the award for Best Deployment of Lone Worker Technology for its dedicated work with Northumbrian Water, while Jason Costello – a security manager for Mitie – was announced as winner of the Security Manager of the Year category.

BSIA member organisation Pilgrims Group was given the International Achievement Award for its work with Harris Communications in developing a Secure Communications Programme in Afghanistan.