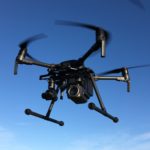 With the popularity of drones escalating in recent years, business owners, members of the public and budding drone entrepreneurs stand divided when it comes to how far the law should go in terms of regulation. Here, James Kelly discusses upcoming changes to UK drone legislation and how those changes might affect business owners and drone operators alike when it comes to the subject of security.

Drones have become a fundamental part of the UK’s fabric of life. They’re now a vital tool for the Emergency Services, for example, being dispatched by the police and Fire and Rescue Services on a daily basis to help save lives. This relatively new technology presents a distinct advantage in that it can gain a bird’s-eye view when it comes to assessing an emergency situation, and also lead to the intelligent deployment of the correct degree of support on the ground.

Drones also assist with the maintenance of the national transport infrastructure by feeding real-time aerial information to Control Rooms in order to help reduce the risk of accidents and improve both productivity and efficiency.

The private sector and entrepreneurs have built businesses around capturing specific aerial images that, until now, were impossible without the use of costly aircraft. The construction industry, for example, makes extensive use of drones to capture images and footage of large-scale projects and chart their progress over time. Similarly, journalists and the wider media are now able to realise a bird’s-eye view of events in real-time at the touch of a button and provide members of the public with a constant stream of news updates.

Recreational users of Unmanned Aerial Vehicles – to apportion their correct name – can also take advantage of the technology, and there has indeed been a sharp increase in usage in recent years. At the touch of a button, those users can gain aerial views and explore their surroundings in ways they never dreamed of in times gone by. Additionally, for those who enjoy documenting their adventures, there’s the added benefit of being able to capture flights through recording devices.

There’s clearly a case to be made, then, for drones realising significant benefits when used appropriately for a specific purpose. However, concerns regarding their impact on the publics’ degree of privacy and security have arisen along with their increased availability and use.

While drones are legal to fly in the UK and there’s currently no need to register a new one, in late November last year aviation minister Baroness Sugg presented a draft Drone Bill to be published in Spring this year. The Drone Bill aims “to ensure the UK remains at the forefront of the exciting and fast-growing drones market, while at the same time putting the correct legislative framework in place to ensure it’s also safe and secure”.

Under the new Drone Bill, those drones weighing more than 250 g will be banned from flying near airports or above 400 ft. Similarly, recreational drones weighing over 250 g would have to be registered to improve accountability. It may also be mandatory for users to employ drone Apps such that they can access the information needed to make sure any planned flight is conducted on a safe and legal basis.

The Drone Bill will give police officers the right to order operators to ground drones where necessary. Officers will also be able to seize drone parts in a bid to prove that they’ve been used to commit an offence.

Baroness Sugg has stated: “Drones have great potential and we want to do everything possible to harness the benefits of this technology as it develops, but if we’re to realise drones’ full potential, we have to take steps to stop the illegal use of these devices and address safety and privacy concerns. These new laws strike a balance, allowing the majority of drone users to continue flying safely and responsibly, while also paving the way for drone technology to revolutionise businesses and public services.”

The Government is also working closely with drone manufacturers to use geo-fencing in a bid to prevent drones from entering restricted zones. The Flying High Challenge, which is funded by the Government and run by Nesta in partnership with Innovate UK, launched last November and cities have been invited to register their interest. Up to five cities will be supported in the R&D of drone technology which could transform critical services in, for example, emergency health services and organ transport, essential infrastructure assessment and repair and parcel delivery and logistics.

The draft Drone Bill comes on the back of several aircraft incidents involving drones in recent years. Rising fears among aircraft pilots were substantiated in a report by Which? Magazine published last October that stated there were more than 80 incidents of drones flying too close to aircraft according to the UK Airprox Board. In September, a Bombardier Dash 8 passenger plane above Glasgow was reported to have missed a drone by a matter of three seconds.

With drone collisions posing a potentially deadly threat to unsuspecting aircraft pilots and passengers, the spike in near misses in 2017 is extremely worrying and, while the British Airline Pilots’ Association has indeed warmly welcomed the draft Drone Bill, it has also called for greater regulation through no-fly zones and the aforementioned geo-fencing around airports.

The concept of no-fly zones isn’t a new one. The rules and regulations of the UK Air Navigation Order (CAP393) comprehensively detail areas that aircraft and drone users should be aware of or avoid, including military aerodrome traffic zones, controlled airspace and airports, danger areas and HIRTAs, restricted areas, private land, by-laws and requested zones. Currently, the maximum fine for flying a drone in a no-fly zone in the UK is £2,500, although proposals in the draft Drone Bill may see this amount increase.

Beyond a fine for flying in no-fly areas, drone users may also face criminal charges depending on the nature of their activities. Last December, a man who flew drones carrying cannabis, psychoactive drugs, mobile phones and other items into prison grounds was jailed. The male in question was found guilty of using two drones to fly contraband into HMP Birmingham and duly jailed for five years.

While incidents like this one demonstrate the risks drones present when in the wrong hands, the Government is currently working closely with drone manufacturers on Project Chatham which aims to improve geo-fencing and restrict drones from entering no-fly zones by tapping into their built-in GPS system. If the project is successful it will prevent recreational users from unknowingly entering restricted areas and stop criminals in their tracks.

View from the police

Commenting on the draft Done Bill, assistant chief constable Serena Kennedy (the National Police Chiefs’ Council’s lead on the criminal misuse of drones) stated: “Police forces are aware of the ever-increasing use of drones by members of the public, and we’re working with all relevant partners to understand the threats that this new technology can pose when used irresponsibly or illegally. Individuals should not take this message lightly. If they’re using a drone to invade people’s privacy or otherwise engage in disruptive behaviour, they could face serious criminal charges.”

Balancing individual freedoms with public privacy and security is a key concern when it comes to drones. With no guarantee of privacy for the public while on their own property, no matter how remote, the Drone Bill will help keep devices at a distance. Devices must fly at least 50 metres away from a person, vehicle, building or structure and 150 metres from crowds/built-up areas. Police will be granted greater powers under the Drone Bill to order pilots to ground their drones where necessary.

The draft Drone Bill appears to tackle many of the security and privacy concerns that have arisen from the widespread use of drones and goes a long way towards drawing clear boundaries with which recreational, commercial and industrial end users should familiarise themselves. However, as is the case with any form of innovative technology that evolves over time in terms of functionality and practical uses, the Government will have to be vigilant in responding quickly to future advanced drone technology in order to ensure the risks posed by drones are sufficiently addressed.

The BSIA’s Specialist Services Section can provide expert advice on sourcing quality drones for commercial or industrial use and operating them lawfully for security purposes. Access www.bsia.co.uk/sections/specialist-services.aspx for further information.