To most people in the street, ‘security’ as an issue generally means protecting individuals and property from harm or serious criminal activity, with terrorism obviously being a big focus. However, as Gideon Reichental explains, seemingly lesser or petty criminal offences still cause an immense amount of distress to the public, thereby rendering security measures to prevent such offences every bit as important.

These so-called lesser issues actually impact people far more widely and include, among other things, anti-social behaviour of all types and polluting or disfiguring the local environment. Indeed, concern for the environment is rising up the public agenda. As well as worrying about the planet’s oceans, rain forests and wildlife, pollution and global warming on the macro scale, somewhat closer to home – and impacting on everyone’s daily lives – are matters like graffiti, derelict or long-term empty buildings, littering and fly-tipping.

One man’s graffiti is another man’s piece of art. Debate rages over this. Meaningless and indecipherable graphics and expanses of spray paint across clean walls and surfaces isn’t to me, and certainly not a Banksy original which is a very different thing (although obviously still graffiti). Meaningless graffiti disfigures buildings and infrastructure, detracts from a given property’s value and appeal and impacts negatively on the entire location or neighbourhood. Cleaning it off takes professional expertise, time and money. It’s a process that needs to be dealt with quickly before it encourages further unwanted artistic scribblings.

Litter and general mess proliferates so quickly and can be anything from overgrown vegetation around a vacant property to abandoned takeaway wrappers and plastic shopping bags full of rubbish, all of which simply encourage further littering and rodent infestation. Of course, the growing menace we all now face is the curse of fly-tipping.

Struggling with the problem 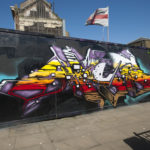 At the end of last year, the Local Government Association (LGA) revealed that councils across the country are struggling to tackle the problem amid budget cuts and the lenient sentencing of perpetrators. The LGA reckons that the illegal dumping of waste across England has increased by nearly 40% in the past six years. The latest figures put incidences in England alone at just under one million, and that’s just public sector figures. With private incidences added, the total will be much, much higher.

No great surprise, though, when apparently no-one has been sanctioned by the courts to the maximum penalty of a £50,000 fine or 12 months in prison since tougher guidelines were issued by the Government in 2014. Unfortunately, investigating and bringing the offenders to justice is a costly and lengthy process which councils find difficult to afford or justify when, by 2020, the overall funding they’ll receive from central Government will have been cut by 60% since 2010.

Added to that, with pressure on budgets, it’s no surprise the costs to dump commercial waste at local recycling centres or landfill sites are rising every year alongside that of the Landfill Tax. It’s a vicious spiral. No wonder unscrupulous operators seek to avoid paying to dump waste. Any unprotected site and vacant building with easy access and no security is an invitation to them. They have no regard to the environmental damage they’re perpetrating. 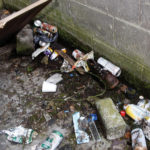 Regrettably, until someone, somewhere takes a serious grip of this problem little can be done to stop this unsightly nuisance on our roadsides and quiet country lanes. In truth, simple security measures are easily installed to prevent fly-tipping on individual properties and sites. Everything from concrete barriers to secure fencing and CCTV. Even if the site is large and open, such as a construction site or car park, and there’s no mains power, temporary CCTV towers can be used that run on solar energy. These all-seeing eyes can be watching everywhere, 24 hours a day, every day of the year. When the surveillance images are relayed to an Alarm Receiving Centre, security patrols or the police can be on site rapidly to catch the troublemakers red-handed. Property owners and managers should be encouraged to call in property security professionals. They would soon sort out measures to deter trespassers and fly-tippers.

According to the police, anti-social behaviour covers a multitude of problems. From fly-tipping, littering and graffiti, as I’ve just mentioned, through to everything from nuisance neighbours and street drinking and on to vandalism, prostitution and begging. However, it’s the inconsiderate or inappropriate use of vehicles that’s a relatively new craze currently causing widespread problems many empty and open sites.

‘Boy racers’ have always existed, but with the advent of films such as the ‘Fast and Furious’ franchise, the glamorisation of speed and thrills from racing and spinning cars and bikes on our streets and private open spaces, such as car parks, is growing in appeal. It may seem a petty or irrelevant nuisance to some, but this growing trend is another costly annoyance. Not only is it noisy and dangerous on our city streets, but the cost of clearing up after the cars and drivers have left private property can be enormous. 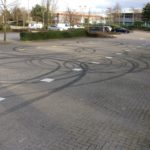 Take, for example, the car park at a well-known out-of-town Shopping Centre. It’s surfaced with special paint to make it safer for visitors, but cleaning off the disfiguring rubber, oil and tyre marks also removes the protective surface and lines. The cost to re-do the car park by the management? £400,000. That’s just one car park. No doubt the cost will be passed on and, somewhere down the line, the shopping public will end up paying for it somehow.

The problem was finally brought to a halt at this particular location by locating temporary mobile CCTV towers which recorded the cars and number plates of the perpetrators as they approached the relevant car parks and then while playing their ‘games’. This evidence was handed over to the police and those involved were prosecuted.

Suddenly, all of the boy racers disappeared into thin air. An easy solution to end a costly nuisance.

Finally, we turn to vacant property and, specifically, unprotected vacant property. It’s like a magnet for everything I’ve mentioned, especially if it has a car park and the whole spectrum of anti-social behaviour goes on there. Squatting, vandalism (including arson) and the theft of anything saleable for cash, such as copper pipes, lead off the roof, fireplaces, etc. Vacant property harbours vagrants and gangs of youths up to mischief.

It’s ideal for drug dealing and use. Illegal raves can happen there if it’s large enough, and so much more besides. All of this is a nightmare to clean and repair and many property owners forget they’re also legally liable for any mishaps that take place on the premises, even if the people involved are trespassing. Such are the vagaries of our law. 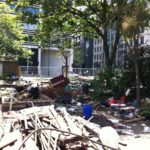 Clearing up needles and drug detritus is dangerous. So is dealing with other noxious substances, not to mention human waste and controlling pests like rats. No wonder, then, that people hate having long-term empty property in their neighbourhood. To them it simply invites and breeds trouble, inside and outside.. It’s a simple situation to remedy, though, with a variety of straightforward security options ranging from in situ property guardians through to steel screens and doors and on again to CCTV. Regular inspections can check that all is in order. Prevention is better than cure, as the old saying goes.

My crusade for several years now has been to keep our buildings secure and in good order and our environment a pleasant one in which to live and work. We, as the security industry, have to spread the word that, with modern technology, it can be so simple and cost-effective to put protective measures in place to deter and prevent what is perceived as low level nuisance, criminal activity and anti-social behaviour which annoys and stresses everyone. The benefits will certainly be appreciated by the wider public. Sometimes, it’s always the little things that annoy the most.

Outside of the box 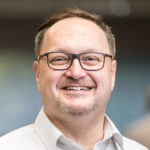 Given the wide variety of security issues now needing to be covered by differing clients in different sectors and with differing needs, security companies sometimes need to think outside of the box. We may compete with each other on one level, but as an industry we should be pulling together.

One size never fits all and we can rarely be experts in everything. Joining forces or sub-contracting helps to win contracts and can offer a better and wider service to clients with special or differing needs, or perhaps one-off projects or events that demand expert input.

We’re all singing from the same hymn sheet and want to see standards raised and every job well done. There’s no doubt that our industry has such a key job to do in keeping people and property safe.

Are Bribery and Corruption Being Overlooked by UK Authorities?