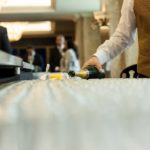 The British Security Industry Association (BSIA) has confirmed that Chris Moon will be the Keynote Speaker at the organisation’s flagship Annual Luncheon, which takes place on Tuesday 12 July 2016 at the London Hilton Hotel on Park Lane.

Chris Moon is a former British Army officer with three years’ operational experience. He left to work for a charity clearing landmines in Asia and Africa and survived being taken prisoner in Cambodia by the Khmer Rouge. Moon successfully negotiated his own release – and that of two colleagues – from threatened execution.

In 1995, Moon was in a supposedly safe area of a minefield in remote East Africa, but an explosion caused him to lose an arm and a leg. He initially survived this ordeal by treating himself, before arriving in South Africa some 14 hours later to receive treatment.

Within a year of leaving hospital, and to his great credit, Moon ran the London Marathon and raised significant sums of money to help disabled people across the developing world.

Moon became the world’s first amputee ultra-distance runner and completed the gruelling Marathon Des Sables in 1997. Since then, he has run the world’s toughest ultra-marathons, among them the 135-mile Badwater Death Valley Ultra and the 95-mile West Highland Way Race.

As a Keynote Speaker, Moon delivers humour, passion and inspiration in his words, covering a wide range of topics from motivation right through to strategic leadership.

Moon will appear at the BSIA’s Annual Luncheon on 12 July, where he will present the annual Security Personnel Awards, the Apprentice Installer Awards and the SaferCash CVIT Special Awards.

The event itself is an ideal opportunity for anyone involved in the private security industry to join forces and celebrate the business sector’s achievements of the past year, while also networking with industry peers and VIPs emanating from Government and the police service alike.

The Annual Luncheon also features a formal address by incoming BSIA chairman Phil Wright, who will present his personally-selected Chairman’s Awards to those individuals who have made significant or lifelong contributions to the private security industry.

Tickets for the BSIA’s Annual Luncheon are available at a cost of £135 +VAT per person for BSIA members or £150 +VAT per person for non-members. Tickets can be booked via the Association’s website at www.bsia.co.uk/events or by contacting the events team on (telephone) 0203 585 1447. Alternatively, send an e-mail to: events@bsia.co.uk

The BSIA would like to thank this year’s event sponsors for their tremendous support. Sponsors in 2016 are:

More information about Chris Moon can be obtained from his website: http://www.chrismoon.co.uk/