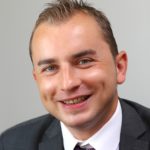 Security guarding solutions specialist Ward Security has announced that executive finance director Ben Draper has been appointed Chief Operating Officer, a new position created within the business. In his new role, Draper will be an integral part of the Ward Security Executive Leadership Team alongside Kevin Ward (managing director and) CEO David Ward, the founders of the company.

The business, which was founded back in 2000, is listed by the Security Industry Authority in the Top 30 regulated security companies for the UK with a current annual turnover of £31 million. The company has enjoyed exceptional organic growth throughout its development, growing at a compound annual rate in excess of 18% during the last five years. In point of fact, this is one of the highest rates in the industry over that period.

Draper joined Ward Security in 2013 from an accountancy practice to become finance director designate. During his time in practice, he gained considerable experience across a number of industries and qualified as a Chartered Accountant. Draper was promoted to executive finance director and the Board of Ward Security Holdings in 2015.

Assuming his new role of Chief Operating Officer, Draper is uniquely qualified to design and drive strategic direction in the business having been part of the Executive Board for the last three years and responsible for diligently steering the business through a period of accelerated growth while at the same time improving financial performance.

As Chief Operating Officer, he will be pivotal in overseeing the daily operations of the business encompassing all departments as well as implementing core long-term financial and non-financial company objectives.

Speaking about the new appointment, David Ward informed Risk Xtra: “We have tremendous confidence in Ben’s ability to steer the business and align Ward Security alongside the industry leaders. He has been a trusted advisor since he joined the Board and his business acumen as well as extensive experience in financial controlling has shown not only that he understands the business inside out, but that he has the aptitude to lead and deliver our common vision on growing the business and deriving the best outcomes from it.”