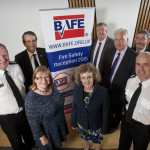 After welcoming fellow MSPs and all those who attended the reception – among them senior members of the Scottish Fire and Rescue Service – Michael McMahon MSP stressed the overriding requirement to ensure the competence of fire risk assessors operating in commercial premises. As things stand, those assessors remain completely unregulated.

McMahon also asserted the need for using independently-assessed fire protection companies thoroughly trained to look for all potential risks such that any future risk events will be effectively reduced and controlled.

Speaking at Holyrood, McMahon commented: “I know from the tragedy at the Rosepark Nursing Home that took place in my own constituency a decade ago now just how important it is that fire risk assessments are carried out by properly qualified professionals. Let’s remember that the Sheriff at the Fatal Accident Inquiry said as much.”

The MSP added: “It’s also essential that there’s a promotional programme in place such that businesses are fully aware of the legal requirements around premises having a fire risk assessment. It’s possible to know whether an assessor is properly qualified by asking if they’ve been certified as being so by one of the bodies that can perform this function. In my view, there’s now a very strong case for such third party certification to become mandatory. People’s safety, people’s lives and people’s livelihoods are at risk. Let’s act now before we live to regret not doing so.” 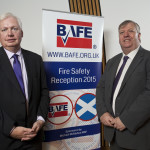 The Fire Safety Reception’s attendees were then addressed by Douglas Barnett, the chairman of BAFE, who thanked McMahon for his diligent efforts in raising this matter at last October’s initial Holyrood debate.

Barnett introduced a short video outlining the current fire safety situation and discussed BAFE’s role in the industry as well as the strengths of using third party-certified companies for fire protection services.

Barnett also described the role played by BAFE in the Scottish Regulatory Reform Group review, itself designed to ensure fire safety legislation is continually developed such that the uppermost standards in fire safety that are possible are always upheld.

Lewis Ramsay, assistant chief fire officer at the Scottish Fire and Rescue Service, subsequently discussed the role of his organisation while also welcoming BAFE as an “important, capable and willing partner”. Indeed, Ramsay lauded BAFE, stating that the organisation has been “a key part of the success of the Scottish Fire and Rescue Service” when it comes to assisting and educating Duty Holders around their legal responsibilities.

The Rosepark Nursing Home fire is still very much an active issue within the Scottish Fire and Rescue Service, duly highlighting the need for independently-assessed, third party-certified fire risk assessors. Ramsay explained: “There’s an issue around the competence of fire risk assessors in terms of the way in which we deploy people and expect them to deliver a very safe, sensible and competent assessment. It’s a complex ask.”

Conclusions from Sherriff Lockhart’s aforementioned inquiry into the Rosepark tragedy stated that the deaths of 14 elderly residents at the home could have been prevented if there had been a suitable fire safety plan in place.

A Fire Risk Assessment is mandatory by law and must be carried out to identify ‘any risks to the safety of relevant persons in respect of harm caused by fire in the relevant premises’. 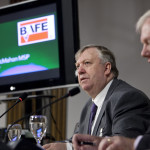 Lewis Ramsay also looked ahead to the outcome of the work conducted by the Regulatory Reform Group to consider the development of competence requirements in addition to the Business Engagement Forum’s ongoing efforts focused on attempting to bring together all stakeholders in an effort to improve fire safety.

Ramsay referred to the recent Study on Unwanted Fire Alarms (which was facilitated by a number of stakeholders including BAFE) and its value for reducing false alarm call-outs. This dramatically assists the Scottish Fire and Rescue Service’s ability to attend and assist with genuine call-outs and other service duties, including fire prevention tasks.

With the support of Alasdair Hay, the Chief Fire Officer for Scotland, Ramsay urged: “There would never be a situation in Scotland where the Fire and Rescue Service would not deploy on receiving a fire alarm call, particularly when there are ‘at risk’ people present on site.”

The Study on Unwanted Fire Alarms project (http://www.firescotland.gov.uk/news-campaigns/news/2015/05/multi-stakeholder-study-into-cause-of-false-fire-alarms.aspx) began in November last year. A report is still pending from the detailed research that has been collated. 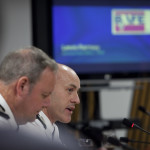 In 2013-2014, there were 6.2 fatal casualties from fire per million people of the population in Scotland. Scotland has consistently exhibited a higher rate of fire fatalities than is the case in England and Wales (with rates of 5.1 and 5.5 per million of the population respectively), although the gap was smaller this year than in any of the last ten years.

During 2013-2014, false fire alarms accounted for 56% of all incidents attended by the Scottish Fire and Rescue Service which is more than for any other incident type. While the total number of false fire alarms has decreased by 12% across the last decade, the number directly attributable to apparatus has increased by 5%.

Also, three in every four false alarms in 2013-2014 were due to apparatus, 70% of which were in “other buildings” rather than occurring in single dwellings.

*For more information about BAFE and the organisation’s fire safety schemes visit: www.bafe.org.uk