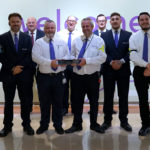 The Axis Security team is credited by The Mercury Shopping Centre’s manager Spencer Hawken with maintaining a safe and welcoming environment for its elderly demographic as well as teenagers who visit at the weekend. “The Mercury Shopping Centre security team is a welcoming presence in Romford,” asserted Hawken. “As knife crime moves East from London into our quiet suburb, we need to be vigilantly creating a safe environment. Thanks to the security team’s dedication, we’ve been able to avoid the problems suffered by neighbouring areas.”

Axis Security’s approach to officer training is to use both Security Industry Authority and conflict management training, affording the team the skills and confidence to take a zero-tolerance approach towards anti-social behaviour on site. This is coupled with The Mercury Shopping Centre’s ‘community’-centric vision to retain and nurture a youth presence within.

“In addition to traditional security duties,” continued Hawken, “the team takes an active role in our community. Officers have helped to set up and run a quarterly gaming league for teenagers, giving the officers an opportunity to show that they’re approachable and that they’re a friend and not a threat to this vulnerable demographic.”

Through this approach The Mercury Shopping Centre’s crime figures from 2018 to 2019 show that the team from Axis Security has reduced the number of anti-social behaviour incidents by 19%, with the number of assaults on site for the same period reducing significantly by 47%.

The team members are also fully-trained in customer service, autism awareness and dementia. “This has led to the site receiving an autism friendly award in 2018,” enthused Hawken, “and undoubtedly contributes to the security team being approachable and visible.”

The Mercury Shopping Centre’s management reports that tenants are complimentary of the security team’s flexible and active approach and the fact that it’s supportive of the wider community, with managers sitting on town ‘crime’ consortiums. The team works closely with the Borough’s ‘Safe and Sound’ initiative to improve town security links and has voluntarily taken the lead in town terrorism simulations.

David Mundell, Axis Security’s managing director, told Risk Xtra: “We have a highly professional and approachable team who are delighted to see their hard work recognised and be held up as the best in the Shopping Centre industry. The team’s ongoing contribution to the community and approach to zero tolerance on anti-social behaviour is making a real difference.”