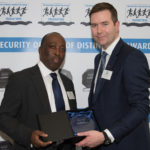 Ferreira was on duty at one of the entrances and his actions helped the City of London Police detain a man under the Mental Health Act. They also recovered an imitation firearm that had been pointed as a weapon inside the Cathedral.

Ferreira and the other winners of the ACS Pacesetters Security Officer of Distinction Awards for 2019 were presented with their awards by Andrew Donaldson (deputy head of risk analysis for Pool Re) on Wednesday 22 May at the Royal Windsor Racecourse.

Following the incident, Jonathan Brady (head of security and resilience at St Paul’s Cathedral) said: “Julio reacted promptly in a threatening situation and managed to keep up with the individual, showing exceptionally brave behaviour. All of us here at St Paul’s Cathedral are very thankful for his heroic actions.”

David Mundell, Axis Security’s managing director, explained: “Our officers are in the front line every day and, while they have the training to deal with these types of situations, Julio displayed great bravery and dedication to the security of others on that day.”