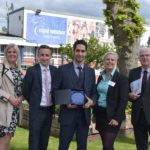 Axis Security officer Hamed Aminaeeamameh has been recognised with an ACS Pacesetters Security Officer of Distinction Award for his actions regarding a counter-terrorism matter at Sadler’s Wells Theatre, one of London’s most popular and prestigious leisure venues.

Only 12 security officers were granted such an honour this year, with the announcement being made at the third ACS Pacesetters Achievement Awards Luncheon held at the Royal Windsor Racecourse.

The incident, whereupon Aminaeeamameh tracked a suspicious woman – who was asking probing questions and seen taking photographs of areas not considered to be of visitor interest – prompted Howard Clark (support services manager at Sadler’s Wells) to nominate him for the award.

“The information Hamed collected was compiled into an investigative report and passed across to counter-terrorism officers at the Metropolitan Police Service,” explained Clark. “He helped to prevent a potentially life-threatening situation. Hamed’s actions and report were highly commended by the Counter-Terrorism Unit, particularly since the suspicious visitor was already deemed ‘a person of interest’ to the police.”

The event followed Sadler’s Wells Theatre stepping up its security alert level after the Paris terror attacks in November last year. “Hamed’s actions serve to emphasise the excellent job that Axis Security’s officers are doing at Sadler’s Wells,” continued Clark. “Their alertness and vigilance at all times ensures the safety of employees and visitors alike.”

Aminaeeamameh stated that recognition by the client and the industry is welcomed. “In times of increased vigilance, particularly in public places such as theatres,” commented Aminaeeamameh, “it’s crucial that security officers maintain high standards.”

The ACS Pacesetters Achievement Awards recognise security officers who have given meritorious service to the industry over a long period of time, or have otherwise helped to avert a crisis on their client’s premises.

ACS Pacesetters membership comprises security companies within the Top 15% of benchmarking and achievement levels as set by the Security Industry Authority’s Approved Contractor Scheme. Of the companies that have ACS accreditation, 119 are eligible to join the Pacesetters, in turn proving their ‘Best in Class’ capability.

Axis Security sits securely within the Top 5% of benchmarked companies. 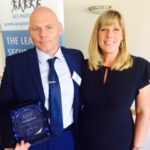 Security officer Thomas Atley of Ward Security is also celebrating after being presented with a Security Officer of Distinction Award at the annual ACS Pacesetters Achievement Awards 2016.

Atley was nominated by Joanne Holloway, facilities supervisor for Archer Daniels Midland (ADM UK), a client on behalf of whom Ward Security has delivered bespoke security services for the last six years. The nomination was in recognition of an outstanding performance following a major gas leak outside the ADM facility in Erith, Bexley in South East London last November.

The incident lasted for most of Atley’s shift. In Joanne Holloway’s words: “Thomas remained professional, calm and efficient throughout, and his communication with the police, the Fire Brigade, the Gas Board, ADM’s management, other ADM departments and colleagues was exceptional. I couldn’t have been more proud when Thomas went to collect his award and the events on the day of the gas leak were explained to the ceremony’s attendees. Thomas’ communication and co-ordination throughout that day made him a truly worthy recipient of the award.”

Kevin Ward, managing director of Ward Security, added: “Ward Security prides itself on attracting and retaining the best staff who can take charge of any unexpected situation that arises. As this incident illustrates, our officers take great pride in their work and put the interests of the client first. Thomas Atley ensured the situation was well managed and that all relevant parties were supported and informed. We’re delighted the client has recognised Thomas’ outstanding efforts and nominated him for this award. We congratulate Thomas on his achievement.”