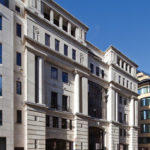 Based in the very heart of the City of London, 105-108 Old Broad Street – also known as Pinners Hall – is a multi-purpose commercial property that houses the offices and conference facilities of several large financial institutions. On that basis, it receives a significant daily footfall of employees and company visitors.

Axis Security was awarded the initial contract to deliver a 24/7 security guarding service on site, employing six security officers whose responsibilities include access control, loading bay services and organising the access of contractors and deliveries as well as site patrolling. 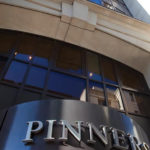 Steven Wadsworth, facilities manager at BNP Paribas Real Estate, said that the need for enhanced customer service was at the heart of awarding the new contracts.

“First impressions count,” explained Wadsworth. “Now, we have the receptionists and security officers working as a team to assist visitors and staff as they enter the building. The new arrangement better fits our vision of what customer service must look like.”

Appointing the sister companies has led to a better integration of services, while training is also centrally co-ordinated. It also gives Wadsworth a single port of call during monthly reviews.

Jonathan Levine, CEO of the Axis Group, commented: “It makes the lives of building and facilities managers so much easier and more efficient by giving them a central port of call for multiple services.”

The promotion day was the first within Axis Security’s Safer Neighbourhood Initiative (SNI), which is offered to clients as an extension of its security guarding services. The SNI was set up by Axis Security in collaboration with community policing teams to support and advise on security matters.

Axis Security used this first event to focus on security implications as employees travel to and from work, as well as explaining other ways of mitigating personal safety issues in topics employees chose to discuss.

William Ball, general manager of Belgrave House, believes the building’s location and proximity to high profile and popular tourist attractions means that members of staff have to be extra vigilant.

“We already work closely with the Metropolitan Police Service and the British Transport Police,” said Ball. “We firmly believe Axis Security’s Safer Neighbourhood Initiative will further reinforce security awareness among our tenants’ employees when in the building, and on their daily commutes. This event was highly successful, and we’ve already been asked to do it again with the aim of hosting two Safer Neighbourhood Initiative events every year.”

As well as being able to talk to security experts and police officers, employees at Belgrave House were afforded a range of giveaways including handbag safety locks, personal attack alarms, property marking kits and torches.

David Mundell, managing director of Axis Security, asserts that the SNI demonstrates exactly how Axis Security is adding further value to its core offer. “Community engagement builds confidence among our tenant groups,” commented Mundell, “enabling us to provide added value to contractual services and, at the same time, foster an excellent working relationship between ourselves, the police service and the business community.”

Axis Security has been working at Belgrave House since 2012, and provides 24/7 coverage for both the reception and loading bay areas. The property was developed in 2004 and measures 275,000 square feet in area.