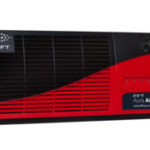 Mark Horton, global sales and marketing director at Ava Group, commented: “The Aura Ai-2 is our next generation controller and was released last year. However, the system has had further performance upgrades since then and now offers monitoring of optical distances of 80 km for perimeter fence detection or 110 km for pipeline or covert buried detection. Accuracy has also been enhanced. The system can now pinpoint an intrusion location down to within within +/-2 metres on a fence-mounted application. The controller is also able to cover different applications simultaneously (for example, fence-mounted and covert buried detection). This essentially offers two units in one, saving on both procurement and operational costs.”

The Aura Ai-2 controller works by pulsing laser light along optical fibre cables connected to each of its two detection channels. Dependent on the application, these cables are either laid adjacent to a pipeline, attached to a perimeter fence or buried along a perimeter boundary. Minute disturbances cause changes in the scattered light. The Aura Ai-2 controller automatically analyses this reflected light to detect, locate and report disturbances.

Advanced optical signal processing algorithms, combined with Artificial Intelligence, accurately and reliably analyse the reflected light to discriminate between intrusions and other causes of disturbance. This significantly reduces nuisance alarms while maintaining full awareness of any situation. When wired in a redundant loop configuration, the two-channel controller provides cut resilience and continues to provide detection in the event of deliberate or accidental cable cut.

Dr Jim Katsifolis, CTO at Ava Group’s Technology Division, observed: “As is the case with any fibre optic system, the key to increasing performance over distance is to maximise its optical power budget. That is, the maximum allowable optical signal loss the system can tolerate while still maintaining proper operation. We’ve enhanced our Aura Ai-2 platform by designing new ultra-low noise detection electronics that significantly increase its dynamic range and, consequently, its optical power budget. When combined with other design improvements that minimise noise while increasing detected signal strength, the Aura Ai-2 now has a power budget of 13.5 dB. We’ve achieved higher signal-to-noise ratios across the whole sensor, in turn maximising the signals detected from both the near and far ends of the sensing fibre.”

As it uses the sensitivity of fibre optic technology, Aura Ai-2 is also perfect for monitoring fibre optic communications networks. The system can monitor for tapping and tampering by connecting spare (dark) fibres inside each network cable to Aura Ai-2. Network cable disturbances, including the removal of protective layers, attempted tapping or cable movement, will be instantly detected and generate an alarm indicating the location.

Powerful solution proving its worth

Mark Horton added: “In the key terms of distance and accuracy, Aura Ai-2 easily outperforms its competitors and has already proven to be highly popular in the market. The system has already been chosen for a large Middle East pipeline and perimeter fence project, with protection of both assets conveniently controlled from just one controller. In another project, the system has also been employed to monitor and provide alerts of any rockfalls or landslides near a railway line that could endanger people or rolling stock.”

Horton concluded: “This powerful solution has many potential uses and is already being employed to protect the security of vital Government facilities, military installations, critical infrastructure and custodial facilities.”