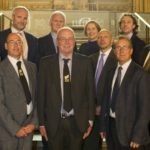 Eight years after Gate Safe – the charity established to drive awareness of the required safety protocols associated with automated gates – took its campaign to Downing Street, the organisation has returned to Westminster to meet with its key stakeholders and discuss future initiatives designed to improve the safety of automated gates in the UK.

The Westminster Round Table, held in the Palace of Westminster on Wednesday 12 September, was chaired by Gate Safe’s Patron Madeleine Moon MP and included representatives from Gate Safe’s established supporters. Among them are the Electrical Contractors’ Association, the Electrotechnical Certification Scheme/Joint Industry Board, the Institution of Occupational Safety and Health, the Royal Society for the Prevention of Accidents, the Association of Fencing Industries, the Chartered Trading Standards Institute and Handsam (the leading expert in education compliance management).

Also in attendance were representatives from the Health and Safety Executive (which has previously commended Gate Safe for its commitment to providing clear, practical and easy to understand information on what constitutes a safe and legally compliant gate) and the automated gate installer community (namely Laurence Turk from AAC GateDoctors and Neil Sampson of Green Gate).

The meeting focused on the need to address the number of automated gate accidents/fatalities which continue to occur in the UK, largely due to the fact that clients remain ignorant of their responsibility to specify a safe gate. This view is borne out in a recent survey* undertaken by Gate Safe which analysed how people are searching for a company when considering an automated gate purchase. Price is deemed to be the overriding motivator and twice as important as the safety of the gate.

Commenting on the meeting, Gate Safe founder Richard Jackson explained to campaign supporter Risk Xtra: “We’ve definitely come a long way since we started Gate Safe and now have a register of nearly 1,400 Gate Safe Aware-accredited installers in the field who’ve undergone the requisite training to help deliver a safe and compliant automated gate/barrier installation for a customer. However, we’re still seeing far too many accidents as a result of an unsafe automated gate and, with this type of equipment on the increase, action must be taken.”

Jackson continued: “Automated gates are classed as machines and, as such, any client – domestic or commercial – who chooses to install a powered gate must be aware of the need not just to have the gate installed correctly, but also for it to be regularly maintained. Aside from the moral obligations of trying to avoid an accident, there’s now a legal precedent that shows the tough line the courts are taking if they identify any sign of negligence in the chain of professionals who may be associated with an automated gate installation.”

In conclusion, Jackson commented: “For Gate Safe, it’s refreshing to see that so many of those professional organisations who have endorsed the work that we do were at the Westminster talks, allowing us to work in partnership to tackle this important safety issue.”

Gate Safe and its stakeholders agreed on a number of actions which, with the help of Madeleine Moon MP, will ensure that automated gate safety will enjoy a heightened profile in the future.

*The survey represents a four-week advertising campaign on Google. Terms relating to safe gates were searched for less frequently than terms relating to cheap gates. The ‘Cheap gates’ advert was shown more than twice as often as the ‘Safe gates’ advert. The advert that was clicked on most frequently was related to the search term ‘Cheap electric gates’