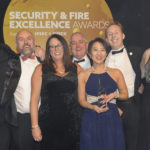 Amulet, the specialist security solutions provider that’s part of the wider Churchill Group, has won the Security Guarding Company of the Year Award (for those businesses over the £25 million turnover mark) at the 2019 IFSEC Security and Fire Excellence Awards. The ceremony took place at The Hilton Hotel on London’s Park Lane.

The award recognises the highest possible service in the security guarding profession. Amulet was named winner thanks to its demonstrated professionalism, consistency of service and the degree of responsibility shown to customers and staff.

Judged on the company’s performance, transformational approach to delivering security solutions, commitment to training, examples of contracts under current management, employee loyalty, high staff retention, developmental culture and Corporate Social Responsibility efforts, Amulet is delighted to have been named the winner of this prestigious award.

Created only last year following the acquisition of AOS Security by Churchill, Amulet was designed to fill an identified gap in the UK’s security sector. Following an impressive year of growth and development, Amulet has already been named a winner at the PFM Awards for its work with Trenitalia c2c Limited.

Commenting on this latest triumph, Amulet’s managing director Darren Read said: “The company is overwhelmed to have won this award following what has already been an incredibly successful year. Being rated so highly against such strong industry professionals is a true testament to the expertise, hard work and dedication of our people.”

Lizzie Neave, the Churchill Group’s marketing and communications director, added: “Amulet is a shining example of service excellence within the security business sector. We’re delighted to see the company recognised with this award. Everyone at the Churchill Group would like to extend congratulations to all those involved and also express our thanks to the organisers of the IFSEC Security and Fire Excellence Awards.”

The IFSEC Security and Fire Excellence Awards is celebrating its 20th Anniversary. This year, over 1,000 industry professionals celebrated exceptional achievements realised within the fire, safety and security business sectors.