The alleged ringleader of an organised crime group thought to be behind attempts to smuggle migrants into the UK has been arrested following an investigation conducted by the National Crime Agency (NCA). Sudanese national Abdulrahman Omer Saleh, 29, appeared at Westminster Magistrates’ Court on Wednesday 21 November after a European Arrest Warrant was issued by Belgian authorities.

The arrest was part of a joint UK-Belgian investigation into a Sudanese and Eritrean crime group believed to be smuggling migrants into the UK, often by dint of using refrigerated lorries as the chosen method of transport.

Prosecutors in Belgium believe Saleh has been involved in at least 18 smuggling operations to date whereby the migrants pay the crime group between 500 and 2,500 Euros per person to enter the UK illegally.

The migrants would be instructed to take a train from Brussels to the town of Jemelle and then walk 15 kilometres to the E411 motorway, where they would then be collected by trucks and transported to the UK via the Channel ports.

Saleh has been in custody following his arrest on 13 November in Sheffield by NCA officers from Project Invigor, the NCA-led Organised Immigration Crime Task Force. Enquiries revealed that he had entered the UK illegally back in August. Saleh was remanded in custody. He will next appear via video link on 19 December before a full extradition hearing on 21 December at Westminster Magistrates’ Court.

Chris Hogben, the NCA’s lead for Project Invigor, said: “Organised criminals involved in people smuggling treat humans as just another commodity they can make money out of, with little or no regard for their safety. The criminal network thought to be involved in this case demonstrated that by making migrants walk along a motorway before travelling hundreds of miles in freezing refrigerated lorries. Through our close working with the Belgian Federal Police and prosecutors, Saleh will now face the face the courts in Belgium.” 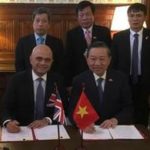 The UK and Vietnam have announced a new partnership designed to tackle modern slavery. On Wednesday 21 November, the two nations signed a Memorandum of Understanding on human trafficking that will allow for greater collaboration around intelligence sharing, supporting victims and prevention work.

Many victims of modern slavery in the UK originally come from Vietnam. In 2017 alone, UK authorities identified 738 potential slavery victims from the South East Asian country.

Speaking after signing the agreement with his counterpart Senior Lieutenant General To Lam, the Vietnamese Minister for Public Security, Home Secretary Sajid Javid said: “Modern slavery is an appalling crime which destroys the lives of its victims. This Government is committed to doing everything it can to protect people from being exploited in the UK and overseas. Working in partnership with other nations, such as Vietnam where many victims are trafficked from, is absolutely vital in preventing modern slavery from taking place and being able to relentlessly pursue the perpetrators. This close collaboration will be a powerful weapon in the fight against modern slavery.”

The agreement is part of the UK’s world-leading action to tackle modern slavery, which includes requiring employers to set out how they’re tackling exploitation in their supply chains, action taken against offenders and increased support for potential victims of modern slavery.

In total, £200 million of UK aid funding has been committed by the Government to tackle modern slavery across the globe. This includes the Home Office’s £33.5 million modern slavery fund, which is focused on countries from where a high number of victims are trafficked to the UK (such as Vietnam and Nigeria).