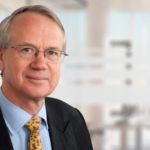 The Interserve Group has announced Alan Lovell’s appointment as the organisation’s new chairman. Lovell replaces Glyn Barker who has lead the company since March 2016. Lovell has held executive positions predominantly in the construction and energy sectors at companies including Tamar Energy, Infinis, Jarvis and the Constain Group. In addition to this, he served for four years as the national chair for the Consumer Council for Water. Lovell is a senior independent director of SIG plc.

Interserve Group CEO Debbie White commented: “On behalf of the Board I would like to thank Glyn for his service as chairman of Interserve. His leadership of the Board and valuable counsel has been vital during a period of significant challenge and change for the Group. We’re delighted to welcome Alan to Interserve. He brings a wealth of experience and has a strong track record of business improvement and transformation.”

In response to his appointment, Lovell observed: “I’m pleased to be joining Interserve at this exciting time. I look forward to working with the Board, and with Debbie White and her Executive Team, to continue delivering Interserve’s transformation and to capitalise on the significant opportunities ahead for the Group as a Best-in-Class partner to the public and private sector.”

In conclusion, Lovell added: “It’s a privilege to succeed Glyn who, during his time at Interserve, has made a tremendous contribution to the Group. I wish him all the very best for the future.”

At the same time, Mark Morris is to take on the role of CFO at the Interserve Group – whose security division is, of course, First Security – from 1 September. This appointment follows the previously announced decision by Mark Whiteling to step down to pursue his non-executive career.

Morris has many years of financial and leadership experience. He joins Interserve from Seadrill Limited, a NYSE-listed company where he was the CFO for the last three-and-a-half years, during that time leading the successful restructuring of the company.

Prior to this, Morris worked at Rolls-Royce plc for 28 years in various roles, most recently as CFO.

Morris brings with him considerable experience in transformation and restructuring and the key skills necessary to drive business performance.