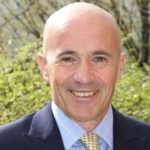 Adrian Belton has been named as the new chairman of the Board at the Defence Science and Technology Laboratory (Dstl). Belton was CEO of the Government’s Food and Environment Research Agency (FERA) from 2009-2014, having established it from a four-way merger including the Central Science Laboratory (where he was CEO from 2008) and the UK Government Decontamination Service.

As CEO of the Construction Industry Training Board from 2014-2016, Belton stepped down from full-time executive-level work to pursue a non-executive career. He has been chair of the Stockport NHS Foundation Trust since 2017 and is currently also a lay member of the Council of the University of Sheffield where he sits on the Audit Committee and chairs the Estates Committee. Belton previously chaired the Board of the Institute of Environmental Management and Assessment from 2008 to 2013.

Belton takes over as Board chairman at Dstl from Sir David Pepper who has served in the role since 2014.

Sir Stephen Lovegrove, Permanent Secretary at the Ministry of Defence (MoD), said: “I’m delighted to welcome Adrian as the new xhair of Dstl. He joins at a very exciting time for science and technology across the whole of the MoD. Under the previous chair, Sir David Pepper, and its new executive team, Dstl has successfully grown its capabilities, customer base and scientific excellence. With his proven track record in business and the public sector, Adrian is the ideal person to take the organisation on to the next level.”

As chair, Belton will lead the Dstl Board, whose role is to support and challenge the Dstl Executive in the development of business strategies, plans, business cases and targets and to monitor Dstl’s business performance against the approved corporate plan.

Gary Aitkenhead, the Dstl’s CEO, added: “It has been a privilege to work closely with Sir David since joining Dstl. He has been an outstanding chair for Dstl through a period of growth and change. For his part, Adrian brings a wealth of relevant knowledge and experience to the role. I look forward to working with him as we determine how best to maximise the impact of science and technology for the defence and security of the UK.”

Adrian Belton commented: “I’m both delighted and humbled to be offered the role of chair of Dstl. Having previously worked in partnership with Dstl and CAST when I was CEO of FERA, I’m now excited and very much looking forward to working with Gary and the rest of the Board to help Dstl in the next stage of its development.”

Belton takes up his new appointment on 1 August.