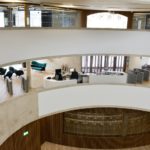 Security is an extremely important aspect of managing any facility, of course, no matter how big or small the building may be. Whether it’s a commercial office or a hospital, managers and owners must account for the safety of a building’s occupants. As times and technologies have changed, so have the solutions available to provide more effective entrance security. Here, Iain Entwistle looks at the problems that can arise as a result of security ‘tailgating’ and how this process can be prevented.

For many years, a lot of building owners and managers chose to establish highly visible patrol regimes conducted by security officers to reduce criminals’ opportunities to commit crime. Although such patrols act as a visible deterrent, the most effective option is a physical access control system such as a security portal that operates 24/7.

These control systems provide the most effective way in which to allow authorised people entry, while acting as a deterrent or a physical barrier for the unauthorised. In addition, as well as providing unmanned security and preventing tailgating around the clock, a physical access control system can help companies keep track of the number of visitors entering the building each day.

Tailgating, which is where a person gains entry to a building or restricted area without presenting a valid security permit such as an ID card or a badge, is one of the most common causes of unauthorised entry. Also known as ‘piggybacking’, it can occur at any entrance or exit and all buildings are vulnerable.

In the majority of cases, tailgating happens unintentionally and is carried out by authorised personnel unwittingly. For example, when someone follows a colleague through a turnstile or speed gate without using their own pass, or when someone holds the door for another person, which people are inclined to do out of kindness. In strict access controlled environments, however, this can cause major problems as it allows would-be intruders to gain easy entrance into sensitive and highly restricted parts of the building.

People and assets placed at risk 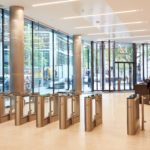 It’s worth noting here that it’s more common, and much easier, for an unauthorised person to gain access into a building or restricted area by closely following another person through an entrance, rather than duplicating security passes or hacking an IT system.

Despite – in most cases – tailgating occurring innocently, it can put the safety of people and any assets stored in the building at risk should an intruder (or intruders) with malicious intent in mind enter a restricted area of the building in this way. In commercial buildings, it could also result in episodes of sensitive data being stolen, or perhaps valuables being removed from staff cloakrooms.

For sectors such as the leisure industry, where controlled access is required, people may resort to tailgating to gain free entry, which results in a loss of revenue for businesses such as leisure centres and sports facilities.

Once entrance control systems have been bypassed through tailgating, it’s almost impossible to confirm who has the right to be in the building and who doesn’t without re-checking everyone’s ID badge or card, biometrics or PIN. In addition, in the event of an emergency, if an individual isn’t recorded as being in the building, even if they have the authority to be there, then they are unaccounted for during a headcount.

It’s for these reasons that a considerable amount of effort has gone into developing modern entrance control systems that prevent unauthorised access and tailgating. Many of the latest devices work by only permitting one authorised person to enter or leave the building at once using an intelligent physical barrier, or electronically by incorporating sensors that detect when an unauthorised individual attempts to ‘piggyback’ their way into the building. 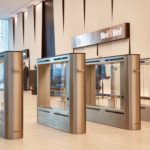 When it comes to choosing an anti-tailgating device, the most appropriate system depends on the specific entry point that requires securing. The options range from mechanical and optical turnstiles and security portals through to Smart Access Control Systems integrated within a building’s existing infrastructure and access control system.

Security portals can prevent unauthorised access and are a good choice where 24/7 unmanned access control is required. Portals are a standalone air-lock unit providing a high level of security and are very effective at preventing tailgating. Some such portals incorporate APD (Anti-PiggyBacking Device) which scans the portal with an ultrasonic sensor to ensure that only one person has entered. If more than one person is present in the portal, an alarm is triggered and the transit is denied. APD is therefore highly capable of detecting whether there’s more than one user in the portal at any one time.

In larger portals, a two-zone pressure mat is usually incorporated to add an extra verification parameter, which requires the person to stand in a specification zone when inside. It’s worth bearing in mind that some systems using weight sensors require cutting into the floor and can have a maximum weight limit, resulting in additional works/cost or a solution that’s not fit for purpose. It’s always worth asking these kinds of questions before specifying a security portal as it avoids any complications and additional costs further down the line.

In buildings such as banks and Data Centres and for Critical National Infrastructure, where higher levels of security are required, it’s recommended that alternative glazing is considered, including anti-vandal and bullet-proof specifications. It may also be necessary to incorporate metal detectors into the portal.

Further peace of mind for specifiers and end users is available through product approvals such as the Loss Prevention Standard LPS 1175 that ensures the delay within ‘Deter, Detect, Delay’ to allow other security protocols to be actioned should a tailgating attempt escalate to a physical attack. LPS 1175 provides reassurance that products meet the highest security standards of intruder-resistant building components, strong points, security enclosures and free-standing barriers. 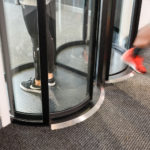 Third party certification issued by the Loss Prevention Certification Board is based on a combination of testing and ongoing surveillance audits. This provides security specifiers with another level of assurance that LPS 1175-rated security portals will continue to deliver the performance achieved during testing.

Security portals for employee-only access points, such as service areas and back offices, where higher numbers of staff may come and go, also reduce operating costs as the need for higher levels of security personnel is reduced within such areas.

For mixed use developments, where a high aesthetic brief is set and a security team is already in place, speed gates are a popular choice. Anti-tailgating is incorporated through the use of sensors that cause the glass wings to close on unauthorised users who attempt to follow closely behind. When an attempt at tailgating takes place, security officers are alerted through an inbuilt alarm system, which can be programmed for manned intervention.

In order to increase the level of security and assist officers still further, speed gates can be supplied with a unique pressure-sensitive cabinet top feature. This will sound an alarm and/or alert security via the access control system should an individual use the cabinet to attempt to climb over the glass wings.

A ‘fail safe’ feature that can be activated during an emergency, thereby avoiding the need for a separate emergency exit, can also be incorporated into these designs. In addition, an optional control panel device for remote controlling of the speed gates, which can be free-standing or mounted to a desk, can allow security personnel or reception staff to control multiple lanes per panel. 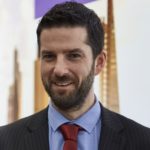 Bar turnstiles, which comprise a barrier arm that’s installed at waist height and electrically-controlled using an access card, are also an option where minimal aesthetics are required. However, they do present a risk of individuals attempting to climb over or under the bar (although this issue has now been addressed by the development of infrared anti-climb sensors within systems that alert security personnel). There are also full-height turnstiles. These present a more robust physical barrier to would-be climbers.

The options available to end users to increase the levels of building security are continuously developing, and particularly so when it comes to entrance control solutions designed to prevent tailgating. LPS 1175 is an important security standard for forced entry resistance. Security specifiers who select LPS 1175-rated security portals can do so in the knowledge that they offer a very robust entrance control solution that has the ability to stop malicious attackers attempting to gain forced entry in their tracks.