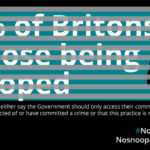 A new poll commissioned by Liberty and conducted by ComRes has revealed that nine out of ten of those British adults questioned believe state surveillance powers as proposed by the Government’s Investigatory Powers Bill are not acceptable.

90% of the public either say it’s only acceptable for the Government to access and monitor records of their e-mails, text messages, phone calls and online browsing history if they’re suspected of (or have committed) a crime or otherwise say this practice is never acceptable.

Liberty believes that targeted access to communications data based on suspicion, with a robust system of independent judicial oversight, is extremely important in terms of preventing and detecting serious crime.

The results of the survey emerge as MPs prepare to debate the new ‘Snoopers’ Charter’ in the House of Commons.

The Bill would force telecoms companies and Internet Service Providers (ISPs) to store every individual’s communications data – records of calls, texts and web activity – and entire Internet browsing history for a year. This data could then be accessed by dozens of public bodies with no need for suspicion of criminality.

Just 8% of those individuals polled believe that it would be acceptable for the Government to access and monitor records of e-mails, text messages, phone calls and online browsing history in all circumstances, whether or not someone has committed (or is suspected of committing) an act of crime.

Liberty suggests that the polling also exposes a lack of public awareness of the legislation – currently being “rushed through” Parliament, according to Liberty – which will grant these and many other “even more intrusive” mass surveillance powers.

72% of those people questioned say they have either never heard of the Bill, or know nothing about it at all.

Key findings of the ComRes survey include the following:

*38% of British adults believe it would only be acceptable for the Government to access and monitor records of their e-mails, texts, phone calls and online browsing history if they’re suspected of committing a crime

*30% feel it would never be acceptable

*8% believe it would be acceptable in all circumstances

Of those individuals questioned:

*18% have heard of the Bill, but otherwise know nothing about it

The Investigatory Powers Bill will force telecoms companies to store everybody’s communications data – records of all calls, texts and web activity – for a period of one year. This includes records of correspondence between journalists and sources, lawyers and clients, MPs and constituents and doctors and patients.

It will also force ISPs to generate and hand over ‘Internet Connection Records’ for the whole population, covering everything from opening apps and uploading photos to entire Internet browsing histories, regardless of criminality or the suspicion of criminality. This will make the UK the only country in Europe to have these powers on the statute book, and “at massive cost” to the public purse.

This information can then be accessed by a large number of organisations and Government agencies, including HMRC, the Food Standards Agency and the Department for Work and Pensions, with no need for suspicion of criminality or for sign off from a Judge or other independent official.

Liberty is now calling on members of the public to sign up to its No Snoopers’ Charter campaign and urge their MPs to reject the Bill when it’s voted on this summer.

Bella Sankey, director of policy for Liberty, said: “In its effort to expand the Surveillance State, the Government is already ignoring technology experts, service providers and three cross-party Parliamentary Committees, but the views of the British public as expressed in this survey will be harder for even the Home Secretary to dismiss.”

Sankey continued: “This Bill would create a detailed profile on each of us which could be made available to hundreds of organisations to speculatively trawl and analyse. It will all but end online privacy, put our personal security at risk and swamp law enforcement with swathes of useless information.”

In conclusion, Sankey commented: “The majority of people know nothing about the Investigatory Powers Bill but, when asked, overwhelmingly reject the approach being proposed. MPs must listen to those whom they represent, vote against this legislation and give us the effective and targeted system the British people want, need and deserve.”