1,700 arrested in targeted knife crime action by police services in England and Wales 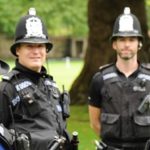 Police across England and Wales have arrested more than 1,700 people during a week of targeted operations to tackle knife crime. Operation Sceptre, which is run by forces every six months on top of their day-to-day activity targeting violence, is a week of intensified action designed to take weapons off the street, arrest habitual carriers of knives and educate young people on why carrying a blade is never the right choice.

Between 16 and 23 September, police officers arrested 1,733 people, with 382 of those relating specifically to knives. The other arrests were for a wide variety of offences including drugs and going equipped to steal.

All 43 of the police forces in England and Wales and the British Transport Police took part in the week.

Weapons sweeps at 1,185 locations resulted in police finding 234 knives or other weapons that had been hidden for potential later use.

There were 708 test purchases at various retailers with 120 stores failing and selling a knife to a person under the age of 18. Retailers found to be breaking the law can face up to six months imprisonment, a fine of £5,000 or both. Other tactics included Stop and Search, speaking to communities and events at schools and youth clubs.

The National Police Chiefs’ Council’s lead for knife crime, Deputy Assistant Commissioner Duncan Ball, said: “Police across the country are tackling the rise in knife crime every single day, but Operation Sceptre gives us a co-ordinated week of intensified action against those who carry knives and retailers who sell knives to under 18s. The week’s results send a clear message that we will target and prosecute habitual knife carriers. There is still much work to do and we continue to collaborate with schools, charities, the NHS, Trading Standards and communities in order to eradicate knife crime.”

The latest Office for National Statistics figures show knife crime is at its highest level since 2011. The figures show the increase is slowing, going from a 14% increase to the year ending June 2018 to 7% for June 2019.

Police officers will now work with other agencies to consider what support those individuals arrested need in order to prevent them picking up a knife again.