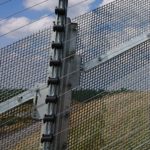 Accredited ArmaWeave installer Crime and Fire Defence Systems has carried out an installation at a high security site where the Zaun Group’s fencing solution climbs a 50 metre-long, 25° slope using full width panels. The specialist perimeter protection solutions manufacturer developed the raking installation method to make best use of the properties of the high security fabric, which itself is the most intruder-resistant fence available on the high security market.

Zaun’s owner and co-founder Alastair Henman explained: “The raking powers of this fencing solution are such a big benefit over 358 and could help in protecting so many high security sites.”

The ArmaWeave fencing – which is unique to Zaun, as is the company’s ability to rake it – is produced on the world’s largest mesh weaving machine at the firm’s West Midlands manufacturing base. Henman added: “We had to invest in the weaving machine ahead of any sales in the belief that we could produce an innovative product installers, specifiers and security and facilities managers would want.”

This solution actively limits the need for stepping panels on slopes and reduces installation costs significantly when compared with standard welded mesh systems, while still conforming to the highest ratings standards for fencing products designed to defend against forcible attack.

ArmaWeave is tested to the very highest standards and can be combined with other intruder systems, electronics and access control to create the optimum integrated fencing solution.

Tens of thousands of metres of this fencing have been installed at water, gas, electricity and nuclear sites around the UK by Crime and Fire Defence Systems in addition to three other accredited ArmaWeave installers: specialist fencing installers Allen Fencing Limited and JB Corrie and the premier prison fencing installer Binns Fencing (which is a Zaun Group subsidiary).

Routes to Learning: Training and Development in the Security Industry