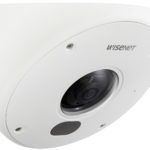 The new Wisenet TNV-7010RC 3 MP corner mount camera manufactured by Hanwha Techwin has been designed to meet the requirements of police services, prison managers and mental health institutions where there’s a defined Duty of Care to prevent detainees, inmates and patients from self-harming.

The Wisenet TNV-7010RC has a built-in 940 nm IR emitter which projects infrared light up to ten metres at a higher wavelength than traditional red glowing IR lighting. This is invisible to the human eye and avoids the risk of disturbing those sleeping in secure rooms.

These true day/night cameras, which are able to capture clear, sharp colour images when light levels are as low as 0.3 lux, also feature Wide Dynamic Range (WDR) – which performs at up to 120 dB – to accurately produce images in scenes that simultaneously contain very bright and very dark areas.

“Sadly, there are inmates and patients who try to self-harm and, with this in mind, the corner mount housing of the Wisenet TNV-7010RC has been built to make it impossible for anyone to tie a ligature around these models provided the cameras are properly installed,” explained Uri Guterman, head of product and marketing for Hanwha Techwin Europe. “A lot of thought was also applied to the design of the housing to ensure that it’s sufficiently robust for secure room environments. It is, for example, IK10+ vandal resistant and has ingress protection rated at IP66 and IP6K9K, as well as a shock detection feature to alert Control Room operators if anyone tries to damage a camera.”

To protect a detainee, inmate or patient’s privacy, masking zones can be configured precisely over a specific area of the camera’s field of view, while a built-in microphone and audio support facilitates two-way communication.

A ‘Hallway View’ provides a highly effective way to monitor narrow vertical areas such as corridors as it enables cameras which can generate images in the 9:16 x 3:4 aspect ratio to work effectively in both tall and narrow spaces.