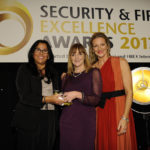 Previous winner Wilson James has emerged triumphant in the 2017 Inspiration in HR Award. Sponsored – and bestowed – by security recruitment specialist SSR Personnel, this prestigious accolade is specifically designed to recognise the work of Human Resources (HR) professionals and their adherence to Best Practice philosophies and techniques. On an annual basis, the Inspiration in HR Award is open to either individuals or organisations.

Service sectors rely on teams of people operating across a number of environments, from customer-focused settings through to those that require an in-depth knowledge of technology. For their part, HR professionals play a key role in the selection, training and monitoring of thousands of individuals across these different spheres.

To reach the shortlist, organisations have to demonstrate that they’re wholly focused on quality and have a pride in looking after and developing members of their workforce.

What sets shortlisted companies apart is that they view their HR function as something that affords them a competitive edge, clearly demonstrating an ability to go above and beyond any current standards in this arena.

In essence, the Inspiration in HR Award is one that recognises a critical differentiator in business application.

Speaking about the company’s victory, Penny Jackson (head of corporate communications at Wilson James) explained: “At the very core of Wilson James is its people. We’re very proud to have such a diverse, engaged and loyal workforce who strive at all times to uphold our vision and values. We’re also proud that we’ve been shortlisted every year as finalists, which is a great accolade for a company in which people are our investment.”

Jackson continued: “For us, the Inspiration in HR Award recognises our continued efforts to attract individuals from all backgrounds and walks of life into a career with our company and the pledges we make to look after them and create an inclusive workplace. Winning this award demonstrates that Wilson James puts its people first and that our people-related practices are a benchmark for the industry.”

As far as Jackson’s concerned, winning this award is very much a statement on the care that Wilson James exhibits, not only towards its members of staff, but also the company’s myriad clients.

“Without doubt, winning this prestigious award acknowledges the investment Wilson James makes in the care, professional development and overall well-being of its people,” enthused Jackson. “Our HR, employment and people-related practices ensure that our clients are provided with teams of exceptional people who are motivated, feel valued and are free to be whom they are in an inclusive workplace.”

In addition to Wilson James, previous winners of the Inspiration in HR Award have included ADT Fire & Security and the HR teams at Advance Security, CIS Security, Corps Security and VSG.