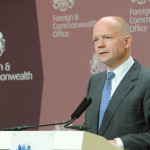 The Council of the Royal United Services Institute for Defence and Security Studies (RUSI) has announced that the Right Honourable William Hague will become its next chairman as of 1 September, taking over from Lord Hutton of Furness who has served in this role since 2010.

From 2010 to 2014, Hague served as Foreign Secretary and, between 2014 and earlier this year, held the prestigious position as Leader of the House of Commons.

Welcoming Hague to RUSI, the organisation’s director general Professor Michael Clarke said: ‘The Right Honourable William Hague is the most ideal choice of chairman to succeed Lord Hutton. His experience at the very top of UK politics since 1997 is unrivalled while his status as a global figure is exactly right for the next phase of RUSI’s development.”

Clarke continued: “I’m greatly looking forward to working with William from September, not least on RUSI’s involvement in the next Strategic Defence and Security Review and all the challenges and opportunities in UK external policy. In global political terms, this is a difficult time to be a political leader, but a wonderful time to be an analyst. William has been both, and his experience is gold dust to an Institute such as our own.”

In response, William Hague commented: “I’m very pleased to be joining RUSI as the organisation’s new chairman. RUSI has an exceptional record for producing outstanding research and analysis across a diverse range of issues. At a time when we face an increasingly complex and unstable world, we need ever-greater insight and scrutiny into the challenges confronting our global security and defence. I look forward to working with Michael Clarke, who has led the organisation so impressively, and his outstanding team of analysts.”

RUSI exists as an independent Think Tank engaged in cutting-edge defence and security research. A unique institution founded by the Duke of Wellington back in 1831, RUSI embodies nearly two centuries of forward-thinking, free discussion and careful reflection on defence and security matters.

Importantly, the organisation consistently brings to the fore vital policy issues to both domestic and global audiences, enhancing its growing reputation as a ‘thought-leader Institute’.

Although very much a British institution, RUSI most certainly operates with an international perspective. Indeed, satellite offices in Doha, Tokyo and Washington DC reinforce its global reach.

The organisation’s enviable heritage and its location at the very heart of Whitehall, together with a range of contacts both inside and outside of central Government, affords RUSI both a unique insight and authority.