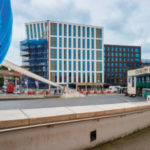 Ramtech Electronics’ WES+ wireless fire alarm system is protecting over 2,000 Bowmer & Kirkland personnel and nearly half a billion pounds’ worth of its clients’ assets on three major university developments.

The £25 million student accommodation project at Coventry University, which includes an eleven, eight and five-storey building, is located on Hales Street in the Lady Herbert’s Garden Conservation Area of the city centre and designed to play host to around 1,200 students.

The WES+ fire alarm system was specified by the developer’s site management team as it’s EN 54-compliant and affords a number of usability benefits associated with the fact that it’s a wireless system. Being wireless means that the units can be repositioned quickly and easily as construction progresses and without the need for the specialist trades required by wired fire alarm systems. The choice of manual Call Points and/or automatic heat and smoke detectors means that sites are protected from fire 24/7 even when personnel are not on site.