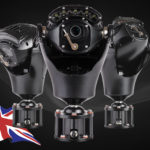 Already a great success story for 360 Vision Technology, the upgraded Invictus camera builds upon the previous all-in-one PTZ package to deliver a camera that’s not only a viable alternative to other low-cost options, but which also has a lower carbon footprint, helping end users to meet their carbon footprint reduction goals.

“On larger projects, the savings on energy consumption and reductiosn in associated pollution offer significant advantages over camera alternatives from the Far East,” stated Adrian Kirk, strategic account director at 360 Vision Technology. “With a host of performance and user-centric operational benefits, the upgraded Invictus is well placed to feature extensively in future Local Authority upgrades as customers examine total cost of ownership and the need to ensure that CCTV equipment is fit for purpose.”

Encompassing an ultra-reliable and accurate self-calibrating Direct Drive PTZ mechanism, Invictus also features 360 Vision Technology’s ‘Attack Detect’ capability that automatically responds to a detected increase in camera load (such as the camera being struck by an object). On detection, the camera’s mechanism instantaneously disengages to prevent damage to the motor drive. A ‘self-check’ routine then establishes if the camera has altered its direction of view during the attack and an automatic re-initialisation is triggered, returning the camera to its last known position prior to the impact.

The benefits of Invictus’ ‘Attack Detect’ response to system operators is that, post-attack, the camera returns to its correct field of view prior to being forcibly moved. This means that vital evidential footage will continue to be captured and without the need for operator intervention.

The feature also ensures that all camera pre-set positions remain intact. This is vital to avoid disruption to the daily running of a surveillance system due to inaccurate pre-set positions.

“Public Space Surveillance CCTV and cameras securing perimeters typically operate adjacent to roads, with a heightened risk of impact from vehicles, be that impact accidental or malicious in nature,” continued Kirk. “Installing Invictus ruggedised cameras into these locations provides customers with a ‘fit for purpose’ surveillance solution at the roadside that ensures continued performance even under attack.”

Completing the upgraded Invictus’ camera package, high-quality paint finishes are available in black or white. For operation within marine environments, a long-life paint option can be specified.

In addition, Invictus is supported by 360 Vision Technology’s UK-based design and manufacturing resource and a comprehensive three-year warranty. An enhanced optional five-year full warranty is available on request.