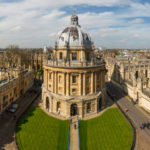 The University of Oxford is a large and internationally-renowned academic institution recognised as the oldest in the English-speaking world. It’s also one of the largest employers in Oxfordshire. The new certification enables it to demonstrate its commitment to transparency and accountability to nearly 24,000 students and more than 13,000 employees. From an initial six cameras in 1990 to almost 200 cameras today, the University of Oxford has sought to use its CCTV system to prevent and detect crime and support a safe environment for staff, students and visitors.

Lesley Nesbitt, crime prevention design advisor for the University of Oxford, said: “Oxford University aspires to the highest standards of CCTV surveillance and the Commissioner’s certification provides confidence to staff, students and visitors alike that the deployment of our CCTV system is proportionate, effective, compliant with relevant legal obligations and, importantly, deployed to protect and support them.”

The University employs its own security team to provide 24/7 staffing for the Security Control Room and undertake patrols of the academic and residential campus. The University of Oxford security services team carries out an annual review of its CCTV cameras to ensure that each camera’s deployment is justified with a pressing need and legitimate reason, identifying cameras that can be removed and areas where new cameras should be deployed.

Tony Porter QPM LLB, the Surveillance Camera Commissioner, explained: “Oxford University is one of the most prestigious in the world. It’s great that it’s demonstrating to staff, students and the public a defined commitment to use surveillance cameras to the highest standards by achieving my certification mark.”

The certification audit was conducted by the Security Systems and Alarms Inspection Board.