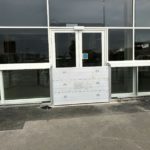 The Flood Company has recently completed the installation of a heavy duty flood mitigation solution for nationwide supermarket giant Sainsbury’s at its store in Carlisle.

The Flood Company was tasked with surveying the site, designing an aesthetically pleasing solution and installing flood prevention measures after the store was forced to close for several weeks as a direct result of flooding following the advent of Storm Desmond in 2015.

The supermarket chain was left with a multi-million pound insurance claim following the disaster, which also saw its insurers threaten to increase the firm’s premium or even withdraw flood cover altogether should preventative measures not be implemented to protect from future flooding episodes.

To provide a solution that matched the current appearance of Sainsbury’s supermarkets, The Flood Company innovated a Buffalo panel system. This has been retrofitted to the building and creates an exterior flood-proof seal.

The Flood Company has installed Buffalo glass, which is an aesthetically pleasing barrier used in public areas, as well as a Buffalo HD barrier system around doors and loading bays.

In addition to these three types of barriers, The Flood Company has also installed secondary pumps and control systems to control the flow of water and create a secondary line of defence for the store. The design underpins a system which is 95% passive. This means that only doors and loading bays require manual operation for the system to be implemented. The process may be completed in under an hour by four members of staff.

The complete system minimises downtime for the store in the event of a flooding episode and has satisfied the insurer to re-insure the site.