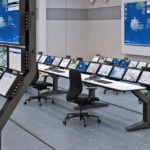 Defined as the science of fitting workplace conditions and job demands to the capabilities of the working population, ergonomics sounds like a simple match up between the employee and work conditions. However, given all the factors that affect Control Room ergonomics, it has now become more about designing the console around the employee. Terry Shough elaborates.

To truly satisfy today’s heightened ergonomic standards, console design has experienced a dramatic shift to deliver solutions that are smaller, with improved functionality and more appeal than ever before. Current console design is conducted with a more comprehensive, top-down approach to Control Room planning, examining every element of the console itself, as well as the overall layout of the space.

For their part, Control Room planners are now incorporating every aspect of human, machine and environment interaction, from monitor tilt and indirect lighting through to air temperature and movement, all in a bold bid to create the optimal working conditions and comfort levels.

Put simply, a Control Room is an environment in which a facility or service can be monitored and controlled. While the equipment in the Control Room is essential to operation, in order to be effective it has to support the requirements of the operator.

It’s important to bear in mind that, while inside a Control Room, a person’s ability to use their senses may be diminished. This requires them to rely on technology within the space to determine what’s happening and/or what action needs to be taken.

Since the Control Room acts as a person’s ‘eyes and ears’, it follows that the design of such a space is extremely important. When designing a Control Room it’s critical to consider all factors, for example equipment selection, operating practices, working environments and furniture choices.

In addition to the design of a workstation, operators within the Control Room must be considered. The overall system will fail if operators are overloaded, undertaking tasks for which they’re poorly trained or straining to read displays that are illegible. It’s necessary to identify the limitations of the operator(s) to minimise potential mismatches between end user capabilities and system demands.

The Control Room itself is important because it serves as the shell of the system. When selecting a room, designers should consider the Control Room objectives and determine how much equipment and people the space will house. The size of the Control Room should accommodate all necessary equipment, while also allowing for individuals to move around comfortably within the space.

Physical layouts should accommodate the use of non-electronic equipment and documents, such as operations manuals, log books, maps and clipboards. Space should also be allowed for positioning such items as telephones, keyboards, controllers, radios and writing areas.

When determining console placement in the Control Room, it’s important to consider the dimensions of the space, the number of stations, the measurements of each station, video wall sizes and aisle width, etc. For ideal viewing angles, there should be no need for head movement and minimal eye movement.

It’s critical to determine if workstations will be used as isolated units or in conjunction with overview displays or other workstations. The height of the console should be calculated so the smallest operator can see over the top of mounted electronics, walls or displays, while the clearance beneath the work surface should allow for the tallest operator to sit comfortably.

It’s critical to factor-in every type of situation and future upgrade – and not only day-to-day operations – when designing a command Control Room. Sufficient space should be maintained in and around the console to allow multiple groups of personnel to view and analyse information quickly and efficiently.

Often, many Control Room designers weigh up the differences between consoles and office furniture, and then argue that both can be used interchangeably. However, since the functions that take place within the Control Room are so important – and often involve life or death decisions – consoles have extensive functionality advantages over basic furniture.

Control Room environments run 24 hours a day, seven days per week and incredible stress is placed upon the equipment in them. As such, bespoke consoles will offer several functional advantages over office furniture. Consoles are designed for handling high equipment loads, including multiple monitors and processors, while remaining ergonomically correct. Further, these monitors may be configured in many different ways to accommodate operators. Conversely, traditional office furniture is only optimised for one or two monitors. Adding extra monitors reduces ergonomic ‘correctness’.

The other aspect of equipment load is the management of processors and other peripheral devices. Consoles keep processors safely behind closed and lockable doors in the base of the console. This eliminates failure due to equipment being knocked or wires being pulled out of equipment. Traditional office furniture might offer a processor holder, but not equipment protection.

Control Room consoles are often built with front and rear access to processors and rack-mounted equipment, allowing IT Departments and other service providers quick access for equipment repairs, replacements or updates without disrupting the operations of the space. Traditional office furniture doesn’t provide full access, requiring disruption to operations.

Consoles are built to withstand the rigors of 24/7 usage, featuring a steel substructure and high performance materials. Office furniture is designed for use eight hours per day, five days per week and will wear out up to three times faster than a purpose-built console.

Most console furniture is warranted for 24/7 use, while traditional office furniture isn’t. Even if you find a supplier who will warranty their product for that type of use, they’ll not have the infrastructure to handle repairs and replacements in a timely fashion in the same way that a console manufacturer would.

Another important factor in Control Room environments is the ability to reconfigure the furniture to accommodate future changes. Traditional wood, glue and screws furniture has no future flexibility built into its design.

When designing display layouts, it’s important to keep in mind that the amount of information an individual can handle is limited. Maximising operator performance requires that the designer knows the exact amount of activity associated with each monitor image and the size of detail demanded.

Displays that are used for close image inspection should be positioned directly in front of the operator, with sizes typically ranging from 19 to 24 inches. Displays outside of the workstation and positioned at a greater distance or behind the console should range in size from 24 to 42 inches and larger.

The introduction of flat-panel displays and touch-screen technologies has had a significant impact on console design. Flat-panel screens take up considerably less space, reduce power consumption and require less cooling within the console. With increased screen resolution, operators can be closer to the display and still not be able to detect the individual pixels. A general rule for viewing video images is that the operator should be at least twice the distance from the screen as the height of the largest image displayed (not the display itself), but not more than eight times. The ideal spot is four to six times.

Touch-screen technology also affects the ergonomics of new console designs, and especially so in high-security or high-attention environments. Studies have shown that, when operators become extremely nervous or are under high stress, they have trouble finding or clicking on an icon using a mouse, but have less trouble pointing with their finger, making them ideal for high-stress environments. However, consoles incorporating touch-screen technology must offer a shorter distance between the operator and the screen – typically less than 28 inches from the edge of the console work surface – such that the screen can be reached from a relaxed sitting position.

The use of ergonomics in Control Rooms can play a pivotal and holistic role in creating an idealised environment for the operators within.