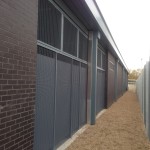 Suffolk Police has specified sheet cladding over steel mesh fencing to cover an illicit goods store in Ipswich. Steel fencing manufacturer Zaun has installed its HiSec Super8 fencing at Landmark House in Ipswich to hide the recovered goods from prying eyes and secure it against potential trespassers and thieves.

The four-storey office block had stood empty since it was built in 2000 by Agilent Technologies next to the A14 until Suffolk Police and Suffolk County Council moved some of their services there to jointly save £1 million a year over the 30-year lifespan of the building.

Landmark House has become the new Ipswich Police Station, home to 850 police and council staff and the stolen goods warehouse, allowing the existing town centre building to be sold and Suffolk County Council to sell five of its vacated offices.

Zaun has installed grey Zintec cladding sheets onto its 2.4 metre-high HiSec Super8 mesh for main contractor Wates. The company supplied cantilever bi-folding automatic speed gates with sensors that inform the controls and open the gates quicker as police vehicles accelerate towards the gates when called out to an emergency.

Zaun also made a huge double set of gates to secure with privacy sheeting to screen the high value asset compound.

Safety authorities have given SkyBet League 1 side Peterborough United FC an excellent safety review following an upgrade to the club’s CCTV arrangements.

The Safety Advisory Group and the Sports Grounds Safety Authority are delighted with The Posh’s safety record and the fact the club has invested in enhancing CCTV to bring its ability to run a safe environment on match days up to even higher standards that may well be the envy of many Championship sides.

Peterborough United appointed a local installer to provide a comprehensive CCTV solution at its London Road stadium. With resources scarcer in the SkyBet Leagues than in the mega bucks world of the Barclays Premiership, the club wanted to retain existing analogue cameras in the solution.

Software security expert EyeLynx was asked to devise a system to bridge between the old analogue and brand new HD cameras that EyeLynx supplied to create a genuinely seamless hybrid solution. 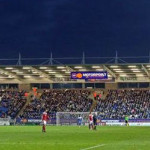 The system now records images from over 30 cameras covering the entire site. Crowd control of both home and away fans is monitored, so too the gates, Ticket Office and car parks.

Maximum safety for all

David Stent, safety officer for events and match day safety at Peterborough United, said: “SharpView is a great asset that gives us hands-on, real-time first visual impact of what’s happening prior to, during and after a game such that we can maintain safety for all users of the ground on match days.”

EyeLynx worked with Stent and security personnel at London Road to provide specific features that allow them to perform all their responsibilities seamlessly. For example, they’re able to send an image of a barred person to the police with a single click while they continue to monitor their movements.

EyeLynx is able to integrate video surveillance into other security systems such as ANPR, access control and facial recognition by way of enhancing safety and security at multi-site facilities.

Stent added: “That’s our priority – a safe ground for all. The system also allows us to go back and review quickly, and take HD quality video and stills which can be provided as evidence to police to assist with intelligence gathering and the pursuit of prosecutions. For us, it’s all about safety, accountability and demonstrating that we’ve assessed all risks and mitigated them as far as possible by taking all reasonable precautions to minimise and avoid them.”