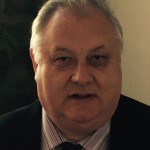 Stuart Naisbett has been an active member of the Association since the early 1980s, originally in the London and South East Region and then serving the International Council while working as a security controller at Centuryan Security. Naisbett’s career progressed, including a spell as general manager at Elizabethan Security and then operations director at Mison Security.

Since 2002, Naisbett has worked as an independent security consultant.

IPSA is the UK’s longest-established trade body for the security industry and represents both companies and individuals through membership schemes, reaching over 30,000 members and their employees worldwide. The organisation regularly consults with its membership and represents their views on relevant industry committees and at standards bodies, etc. IPSA is governed by a Board of elected members exhibiting a wide range of experience across the security sector. 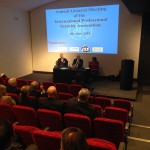 Alan Clamp (CEO of the SIA), Mike White (IPSA) and Elizabeth France (Chairman of the SIA) take part in a Question and Answer session at IPSA’s recent 2015 AGM

In addition to Naisbett’s appointment, Jane Farrell (development manager for the Centre of Excellence at Sodexo) has been appointed deputy chairman and Ian Pugh (head of security at Bilfinger Europa Facility Management) has taken on Naisbett’s previous role as honorary treasurer. Previous chairman Mike White and Una Riley, the previous deputy chairman, both remain on the Management Board along with Sodexo’s global security director Simon Pears.

The 2015 IPSA AGM was combined with a networking luncheon followed by industry talks from both Steve Martin of the Fire and Security Association and Elizabeth France, chairman of the Security Industry Authority (SIA). France took the opportunity to introduce the SIA’s new CEO Alan Clamp, who was attending the event as his first opportunity to meet the security industry on only his fourth day at the Regulator.

Following the talks, Alan Clamp and Elizabeth France answered questions from the audience, in turn affording IPSA members in attendance an insight into their thoughts for the future direction of the SIA.