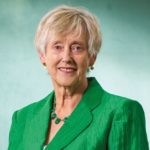 Specialist risk management software and services provider Sword Active Risk has announced that Dame Stella Rimington DCB, former director general of MI5 and acclaimed author, will be the Keynote Speaker at the upcoming Active Risk Manager Global Conference in London. The event takes place on Thursday 18 October at the Dorchester Hotel in Mayfair.

Thought to be the inspiration for the fictitious James Bond character ‘M’ (as played in recent Bond films by Dame Judi Dench CH DBE FRSA), Rimington worked at MI5 from 1969 to 1996 and operated in all of the main fields of the Service’s responsibilities – counter-subversion, counter-espionage and counter-terrorism – successively becoming director of all three branches.

Rimington was appointed director general of MI5 in 1992, in turn becoming the first woman to hold the post and the first director general whose name was publicly announced on appointment. During her time as director general, Rimington pursued a policy of greater openness for MI5, giving the 1994 Dimbleby Lecture on BBC TV and several other public lectures.

In July 1993, MI5 (with the reluctant approval of the British Government) published a 36-page booklet titled ‘The Security Service’ which revealed publicly, for the first time, details of MI5’s activities, operations and duties, as well as the identity and even photographs of Rimington as director general.

Rimington was made a Dame Commander of the Bath (DCB) in 1995 and has been awarded the Honorary Degree of Doctor of Laws by the Universities of Nottingham and Exeter.

Following her retirement from MI5 in 1996, Rimington become a non-executive director of Marks & Spencer plc, the BG Group plc and Whitehead Mann GKR. She serves as chair of the Institute of Cancer Research and also as a member of the Board of the Royal Marsden NHS Trust.

In November 2005, Rimington spoke out against national ID cards. She has also described the US response to the 9/11 attacks as a “huge overreaction”.

In remarks reported in 2009, Rimington expressed concerns that the Brown administration wasn’t “recognising that there are risks, rather than frightening people in order to be able to pass laws which restrict civil liberties, which is precisely one of the objects of terrorism: that we live in fear and under a police state.”

Keith Ricketts, vice-president of global marketing at Sword Active Risk, commented: “We’re delighted to have secured Stella Rimington as part of an illustrious line-up of fascinating speakers for our Active Risk Manager Global Conference in London. Once again, we’re building up to what will be a stand-out event in the risk sector’s annual calendar, whereby risk practitioners and Active Risk Manager end users are able to network, share experiences and learn from both experts and industry peers.”

*For more information and to register your place at conference visit www.armgcc.com/london/