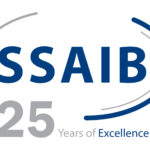 The Security Systems and Alarms Inspection Board (SSAIB) is honouring 25 years of excellence with a series of celebrations throughout 2019. Formed back in 1994, the SSAIB has continuously sought to maintain the highest of standards and is proud to have reached such an historic landmark as a certification body for organisations providing security systems and services, fire detection and alarm systems, telecare systems and services, security guarding and monitoring services.

In addition to unveiling a special SSAIB logo designed to commemorate reaching the landmark 25-year milestone, various special events will be held throughout what is set to be a massive year for the organisation.

After enjoying a hugely successful UBM-organised IFSEC International 2018 thanks to its exclusive SSAIB Ice Bar, the technical inspectorate will once again be returning to ExCel in June with another bar for this year’s showpiece security exhibition. The SSAIB Lounge will be welcoming anyone and everyone attending IFSEC International 2019, which runs between 18 and 20 June.

The SSAIB Lounge will also play host to the unveiling of this year’s Women in Security Awards on the second day of IFSEC International. The SSAIB has been named as the host of this year’s event that recognises the achievements of females working within the security business sector. Taking place on Thursday 12 September aboard The Dixie Queen on the River Thames, the dinner/dance will also act as the main birthday party celebration for ‘SSAIB 25’.

That maritime theme will also be prevalent earlier in the year as a small function for SSAIB staff will see head office workers, auditors and Board members take in a boat trip along the River Tyne in May, finishing with some commemorative ‘SSAIB 25’ photographs on Newcastle Quayside.

The SSAIB’s sales and marketing manager Andrew Brown, who has worked for the organisation for the last 22 years, has been responsible for the planning of ‘SSAIB 25’ and is delighted with the outcome. Brown commented: “The SSAIB has always prided itself on being a helpful and friendly certification body that always maintains the highest professional standards. It’s great that we’ve been able to achieve that goal for 25 years now. We set out believing in installers being able to have a choice of inspectorates and that ethos has allowed us to establish the SSAIB in a field where others have tried and failed.”

Brown continued: “Having worked at the organisation since 1997, it has been fantastic to see the SSAIB grow into the fantastic success that it is today. Therefore, it’s only right that we reflect on the achievements we’ve realised  so far and celebrate reaching a quarter of a century of certification.”

Focusing on IFSEC, Brown explained: “The SSAIB’s Ice Bar was a runaway success at IFSEC International last year, despite us going into the event uncertain about exactly how it would pan out for us, to be honest, so it made sense to return this year with the SSAIB Lounge. Being able to tie that in with the launch of the Women in Security Awards is great as well, what with that event being a joint celebration for ‘SSAIB 25’. We’ve also unveiled the new ‘SSAIB 25’ logo for 2019, which will be added to a number of commemorative items of merchandise that we’ll be handing out at all of our exhibition appearances over the next 12 months.”

In conclusion, Brown enthused: “All in all, I’m sure it’s going to be an exciting year for the SSAIB and a fitting tribute to what has been a fantastic achievement for all involved over the last 25 years.”