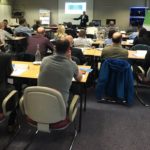 In response to the increasing interest in and use of its SPEKTOR Digital Forensic Intelligence systems, Evidence Talks recently held its third Annual Workshop for customers in the law enforcement sector. Combining new feature demos with user success stories and a progress review of technical improvements made in response to user feedback received at last year’s event, the emphasis was very much on strengthening delegates’ knowledge and understanding of how to use SPEKTOR to best effect.

Other elements included an introduction to SPEKTOR Ultra and a progress update on Cascade Forensics (the company’s new, fully-scalable client server architecture).

A series of Keynote presentations given by representatives of Northumbria Police, the Norfolk and Suffolk Constabulary and the British Transport Police (BPT) provided delegates with the opportunity to learn how other forces are using the tools to identify the perpetrators of cyber-enabled crime, abuse and fraud as a key component in helping to bring offenders to justice.

Kevin Chandler, Detective Constable in the Cyber Crime Unit at BTP, explained how the force’s first use of SPEKTOR led to a successful prosecution of a multi-million pound phone fraud case. Launched in response to a string of mobile phone thefts on the tube, BTP’s Operation Park involved more than 100 officers and raids on a number of private properties and business addresses.

When faced with examining the contents of some 47 devices, the unit decided to evaluate the role that Evidence Talks’ SPEKTOR system could play. New to the technology and without a background in digital forensics, a non-technical investigator used SPEKTOR to image and collect evidence from all of the recovered suspect devices.

Using reports generated by SPEKTOR that identified where the evidence was, the force was then able to rapidly focus its efforts on six evidential key items as well as the recovery of 45,000 unique IMEI numbers. Subsequently, there were a number of successful prosecutions.

Andrew Sheldon, CTO of Evidence Talks, explained: “We’re always looking to provide better ways of achieving justice using innovation and partnership. This annual event fits perfectly with that objective. Digital forensics is one of the most powerful weapons we have at our disposal to fight all manners of crime. The more skilled that solution end users are, the better the overall results will be.”