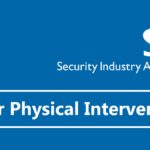 Private security industry regulator the Security Industry Authority (SIA) is running a national campaign in June and July that aims to make the night-time economy a safer place for both security personnel and people on nights out. The campaign, which kicked off on Monday 17 June, will involve SIA investigators visiting pubs, bars  and clubs in towns and cities across the UK to meet door supervisors.

The SIA’s focus is to promote safer restraint techniques to door supervisors, while at the same time encouraging them to report violence or abuse that’s directed towards them. The SIA will be sharing posters and leaflets on social media throughout June and July under the hashtag #SaferNightsOut.

Ed Bateman, director of partnerships and interventions at the SIA, said: “Since 2016, we’ve recorded ten deaths associated with restraint techniques used by security personnel. This campaign aims to reduce these risks by ensuring that security staff know, and use, the safer restraint techniques mandated in their training.”

Bateman added: “At the same time, we’re aware that security personnel are increasingly facing verbal and physical abuse in the workplace. It’s not ‘all in a day’s work’ for a door supervisor to return home to their family facially scarred or otherwise injured. We want door supervisors to report verbal or physical abuse to the police, their employers or to ourselves via our website.”

The SIA is starting the campaign by sending every licence holder a copy of the ‘Safer Physical Intervention’ leaflet.  This will be followed up by visits from SIA investigators to venues in 22 towns and cities across the UK. They will be sharing information on safer restraint, listening to the concerns of security staff and encouraging all door staff to report violence and abuse against them.

Kevin Young, who manages the SIA’s South East Region partnerships and interventions team, is leading the campaign. He observed: “We’re looking forward to meeting door staff and having these important conversations. We’re asking venues and security staff to look out for our #SaferNightsOut messages on social media and for them to engage with and share our posts on social media while the campaign is running.”

**The Regulator has also created three posters encouraging security staff to report violence and verbal abuse. They can be found on the Safer Nights Out campaign page