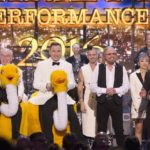 Showsec has received recognition for helping to make the Royal Variety Performance’s eagerly-awaited return to the Eventim Apollo in West London a memorable occasion.

The crowd management and event security specialist played a key role in the staging of this traditional pre-Christmas event for charity at the Hammersmith venue, which was attended by Prince Charles, the Prince of Wales, and Camilla, Duchess of Cornwall.

The show, which raises vital funds for the Royal Variety Charity, was hosted this year by comedian, actor and children’s author David Walliams and featured performances by a star-studded line-up of entertainers including Robbie Williams, Sting, Lady Gaga, Diversity, Gary Barlow and Britain’s Got Talent winner Lance Corporal Richard Jones.

The cast of The Beatles Cirque Du Soleil’s LOVE show flew in from Las Vegas for a special anniversary performance, and there was also a sneak preview from the cast of Gershwin’s classic musical ‘An American in Paris’.

Such a prestigious occasion required a considerable amount of planning and preparation on Showsec’s part.

“The Royal Variety Performance last ran at the Apollo eight years ago now, so it was good to have the event return after a long time away,” said Showsec’s operations executive Simon Howard.

“This was a one-off special show which put both ourselves and the venue in the spotlight because it was being filmed for broadcast a few days later on ITV. Due to the high profile of the event and the Royal attendees, a high level of security was required throughout. On that basis, stakeholder meetings with ITV, the Metropolitan Police Service, local authorities and Royal Protection specialists began early in the year.”

Howard added: “It was important to ensure all aspects of the event were carefully planned for. There were three load-in days and two rehearsal days, which is more than for any other show we have project-managed at the Apollo. Our 24-hour operation worked well in conjunction with production to guarantee the tight time schedule was met in the run-up to the event.”

Praise from the client

Lorraine Crowther, events co-ordinator for the Royal Variety Charity’s events team, informed Risk UK: “The Royal Variety Performance 2016 was a great success and we’re receiving a lot of really wonderful feedback from our guests and supporters.”

Crowther continued: “Thank You to Showsec for all of the company’s help in the run-up to and on the night of the show itself. Showsec’s facilitation of the Interval Reception was particularly helpful. Having the extra security presence on the door was a huge assistance. The team handled everything brilliantly well.”