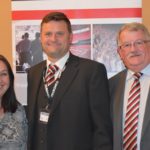 Alan Wallace (centre) of Showsec pictured with representatives of the FSOA

Showsec has just extended its working partnership with one of British football’s leading authorities, the latter having played a key role in the Leicester-based crowd management and event security specialist increasing its presence within the game. At the bi-annual conference of the Football Safety Officers’ Association (FSOA) in Stratford, Showsec announced that it has now reached an agreement to continue as the organisation’s main sponsor for the next five years.

The partnership with the FSOA has already made a significant contribution to the enhancement of public safety at sports stadiums the length and breadth of the UK, and therefore helped to improve the matchday experience for football supporters. With the new long-term agreement now in place, Showsec will continue to work on initiatives with the FSOA which are focused on enhancements around crowd safety techniques.

The deal also affords the company a platform on which to develop an extended presence in the national game. Showsec already enjoys varying degrees of involvement with a number of Premier League clubs including the reigning champions Leicester City, this season’s early pacesetters Manchester City, Stoke City, Crystal Palace and Sunderland FC. In addition, Showsec operates at many other clubs at different levels throughout the Football League, and has worked with some non-league clubs.

On that very note, John Newsham (the FSOA’s business development and membership manager) commented: “This new agreement with Showsec means that we can look towards helping the lower league clubs benefit from being a member of our association. It’s not just about the safety and security advice which Showsec can offer to our members. The business can also provide operational support on occasions when these clubs may be faced with a big match that presents challenges in terms of crowd control.”

Newsham continued: “The excellence Showsec delivers in safety and security to many stadiums and the excellence that the business can still bring to other stadiums is of great benefit to us. It’s one reason why we’re delighted to have the company on board for another five years. Long may the partnership continue to grow and prosper for both parties such that, together, we can put even more back into the game. The partnership will help to ensure that, wherever possible, people who visit football stadiums are as safe as they can be in the current climate.”

Alan Wallace, Showsec’s regional manager for the North, confirmed the new agreement in his address to the FSOA Conference, after which he also joined a panel of experts to take questions from representatives of many clubs. Wallace duly described the extended opportunity to work closely with the FSOA as being “absolutely priceless” in terms of Showsec’s involvement in the game.

“While the FSOA may appear to be few in terms of numbers, its influence stretches far and wide,” explained Wallace. “It’s not just the 20 Premier League clubs at the top, but also the 92 Football League clubs and beyond that as well. Football is woven into the fabric of every corner of daily life, so we’re delighted that we have the chance to build on this partnership. The benefit for us is that we’re brought into the ‘inner circle’ where we can actively engage with very influential people. This is much more than just a sponsorship, though. Rather, it’s a partnership in which we’re extremely committed to making a big contribution in terms of further advances in crowd safety so that supporters derive the maximum amount of enjoyment out of the game.”