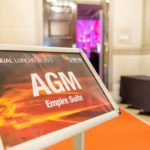 At the British Security Industry Association’s (BSIA) Annual General Meeting held on Wednesday 12 July, 24 industry experts were elected to represent the Trade Association’s various sections of membership. Each of the Association’s sections of membership – which cover all aspects of the private security industry – are led by a chairman and vice-chairman who help to facilitate the vital discussions held at quarterly section meetings. Throughout their term, they will help the BSIA to identify the key issues within their sectors that a collaborative endeavour can achieve in order to progress the industry.

James Kelly, CEO of the BSIA, commented: “The BSIA’s membership and the very important contributions it makes to the industry is something about which the Association is extremely proud. Our members are committed to working collectively to ensure that the industry continues to advance. Indeed, many of the key developments in the sector have been largely down to their expertise and commitment.”

Kelly added: “I would like to extend a warm welcome to all of our newly-elected chairmen who will be carrying the work of their respective sections forward, while also expressing my gratitude to all previous section chairmen for their contributions to the organisation and, indeed, the security industry as a whole.”

Dirk Wilson enters the second year of his term as chairman of the BSIA and Simon Adcock, CEO of ATEC Fire and Security, was elected as vice-chairman of the Association. Adcock will take up the role of chairman in July 2018.

The BSIA would also like to thank Pauline Norstrom, managing director of NetVu, for her contributions to the Association over the last four years in which she has held the positions of vice-chairman, chairman (for two years) and, latterly, immediate past-chairman.

The complete list of BSIA section chairmen and vice-chairmen is as follows:

Cash and Valuables in Transit