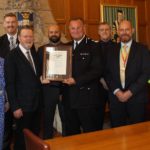 The University of Sheffield has had its excellent security management regime recognised after gaining the prestigious Secured Environments accreditation. The award, which affirms that the seat of learning is following several key principles to maximise the safety of staff, students and visitors alike, was recently presented to Professor Sir Keith Burnett, president and vice-chancellor, by South Yorkshire Police chief constable Stephen Watson.

The Secured Environments police certification scheme was established back in 2007 and provides a framework for managing and meeting the challenges faced by security teams, duly enabling organisations to refine their approach and demonstrate that it’s effective. The overriding aim is to help organisations think about the risks they face and evaluate how to make the very best use of measures they already have in place to mitigate them.

This scheme awards certification to those organisations that are able to show they’ve adopted six key principles for protecting themselves against crime. These are a demonstrable commitment to create a secure environment, understand the risks, respond to and reduce those risks, develop a management plan to achieve stated aims and objectives, implement the solution and evaluate the process.

The University of Sheffield faces a number of challenges in managing security, not least in terms of its size and scale, but also due to the institution’s central location in the city and the varying functions of its numerous sites and buildings. The Secured Environments accreditation encompasses not just the city centre campus, but also University of Sheffield-owned accommodation and the Advanced Manufacturing Research Centre buildings.

Richard Yates, head of security at the University of Sheffield, reflected: “We’re thrilled to have been awarded the Secured Environments accreditation. There are other accreditation schemes available, but none have the same academic merit and background. This accreditation allows us to demonstrate to students, staff and visitors that we’re committed to security and safety, and that this commitment has been independently audited against a high set of standards outlined by Police Crime Prevention Initiatives.”

Yates continued: “Achieving this award has been a university-wide effort involving the vice-chancellor, senior management and the security team, as well as an unprecedented number of colleagues who supported us by completing a survey. The accreditation is valid for three years and will be beneficial for colleagues, students and the local community, as well as the university’s business and research interests. It’s a validation that our security practises and processes are to a high standard. We will continue to work hard to ensure this remains the case.”

South Yorkshire Police chief constable Stephen Watson commented: “I’m delighted that the University of Sheffield, which is a first class university, has put the effort into attracting this accreditation. What we know is that Secured Environments, which is related to Secured by Design, works on the basis of evidence. It’s very fitting, therefore, that a university should apply evidence and put the hard work in to attract this particular piece of accreditation. A very significant thing I think for the university, and for the wider public, is that the benefit of this accreditation will be to make people safer, particularly among the student body, at what is one of our country’s leading universities. This is good for the university, good for Sheffield and good for us as a nation.”

Guy Ferguson, CEO at Police Crime Prevention Initiatives, concluded: “It’s crucial for today’s educational establishments – and not least those that share a central location with the public and a range of other organisations – to recognise and respond to the crime and security risks they face. Good security is valued by employees, students and, indeed, the students’ parents. It also supports overall crime prevention efforts in the local area. Congratulations are due to the University of Sheffield for recognising and rising to this challenge and for meeting the high standards required to achieve this prestigious award.”

Secured by Design seeks to achieve sustainable reductions in crime through design and other approaches to enable people to live in a safer society. Secured by Design-trained officers and staff in police forces advise on proven crime prevention techniques in a range of sectors including housing, the commercial world, transport, healthcare, education, leisure and many others.

Secured by Design works with many other organisations – including the Government, British and European Standards authorities, Trade Associations and the construction industry – in encouraging manufacturers to achieve its accreditation. That accreditation denotes a high standard which ensures quality over time rather than one-off testing. At present, upwards of 650 member companies are signed up to Secured by Design.

Independent research conducted at the University of Huddersfield shows that Secured by Design developments including crime prevention techniques in the built environment and accredited products like doors and windows can reduce criminality such as burglary by up to 75% in new-builds. Evidence suggests this level of crime reduction is sustainable year-on-year and represents a significant reduction, particularly as most Secured by Design developments are in social housing in deprived areas.

Falling crime realises less demand on the police service and Local Authority resources, while the use of police-accredited products means less maintenance, subsequently freeing up budgets for other priorities.

Further information is available at www.securedbydesign.com

For its part, Secured Environments was developed through the partnership of Police Crime Prevention Initiatives and Perpetuity Research and Consultancy International (PRCI), the specialist in crime, risk and security management. To date, Secured Environments locations include a landmark building, Shopping Centres, universities, Halls of Residence, a hospital, Data Centres and business premises. Access www.securedenvironments.com