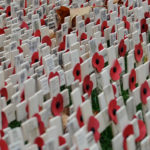 The Security Institute’s 2017 Remembrance Lecture is being held on Thursday 16 November in the Queen’s Room at Armoury House in the City of London. This year’s lecture is being given by Craig Mackey QPM, the Deputy Commissioner of the Metropolitan Police Service.

Remembrance is very much a key part of modern British life, culture and heritage. A key strength of the Institute is that feeling of belonging to a group that cares. Each year, the Institute holds a special evening event close to Remembrance Sunday such that, as an organisation, it can ensure sacrifices are never forgotten and that there’s an opportunity to pause and remember fallen colleagues.

Craig Mackey joined the police service in 1984 having previously been in the Merchant Navy working for BP. His police service career to date includes time spent at the Home Office with Her Majesty’s Inspector of Constabulary and at Gloucester Constabulary as Assistant Chief Constable and then Deputy Chief Constable where he was Gold Commander for the terrorism operation that resulted in the arrest of the second shoe bomber.

In September 2007, Mackey was appointed Chief Constable of Cumbria Constabulary and then awarded the Queen’s Police Medal in 2009. He was appointed Deputy Commissioner of the Metropolitan Police Service in January 2012.

The outline programme for this Continuing Professional Development-accredited evening event, which ends at 9.00 pm, is as follows:

7.00 pm: Welcome and Introduction. The Security Institute and its guests pay their respects.

*Cost of attendance for both Institute members and their guests is £40 per ticket (which includes all refreshments and a charitable donation). To book your place visit The Security Institute’s website or contact the Institute at hq on (telephone) 08453 707717