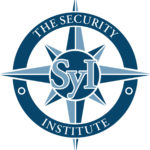 The Security Institute has introduced an Annual Awards event specifically orchestrated to recognise the outstanding contributions made by practising professionals in areas such as counter-terrorism, port security, security management, security studies and engaging the interests of younger members of the security profession in order to help them build a successful career. The Security Institute’s inaugural Annual Awards presentations were made at Armoury House (home of the Honourable Artillery Company) in the City of London on Tuesday 27 June.

Garry Evanson CSyP FSyI, chairman of The Security Institute, commented: “We believe that recognising someone’s hard work, extra effort or special attainment is an important marker. It brings kudos to both the recipient and to our Institute more generally. When this recognition is celebrated by way of an official award, whether that be in the form of a certificate, a memento or a trophy, then the whole security sector joins in celebrating that success and the recognition becomes even wider.” 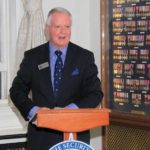 Jerry Woods CSyP FSyI, chairman of the Institute’s newly-formed Awards Committee, explained: “Following a recent review of our awards, the Board of Directors decided to pull all of them together into one event. This has enabled the Awards Committee to be adjudicators in the nomination process. As a result of the review process, we’ve also introduced the President’s Award.”

The Security Institute is a volunteer organisation very much dependent upon the support of members who contribute towards its many and varied activities. A large number of members contribute in some way towards the work of the Institute, so the Recognition Award is designed to acknowledge those individuals who’ve ‘gone the extra mile’ and made a really special contribution towards the ongoing success of the organisation. 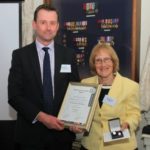 Brian Dillon is a significant contributor to the important work of the Institute by dint of drafting information about terrorist incidents for circulation to members. In completing this valued work, Brian frequently gives significant amounts of his own time and often prepares briefing information at weekends. It’s only with the support and help of experts such as Brian that the Institute is able to meet the growing expectations of its members.

“I’m surprised to have received this award,” said Dillon. “Many people volunteer their time to assist The Security Institute so to be singled out for recognition is very kind. As the threat landscape continually evolves, it’s important that the Institute keeps its members up-to-date. This necessarily includes working out of hours and ensuring that the organisation is closely aligned with the current work of the police service and the authorities.”

Put simply, Denis Murphy is a role model for others to follow. In his own time and often at his own expense, Denis has developed his career by obtaining qualifications such that he’s now one of the most qualified and experienced members of the Institute. Denis’ commitment to the Institute is second to none and he very much leads the way when it comes to the development of others as security professionals.

Speaking about the Recognition Award, Denis Murphy enthused: “I’m both pleasantly surprised and pleased to receive this great award from my peers.” 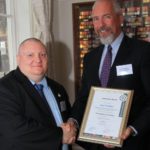 The John Aplin Award is for the student who achieves the best results in The Security Institute’s Certificate in Security Management course of study. In 2017, there were seven nominations for students who achieved maximum marks in last year’s courses and, from this list, four finalists were selected.

During 2016, Clive Fisk studied for the Institute’s BTEC Level 3 Certificate in Security Management qualification and achieved the maximum marks possible. As a result of his outstanding submission, Clive was chosen as the overall winner by the newly-formed Institute Awards Committee. 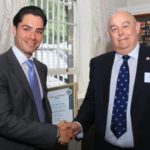 In the nomination for this award, James Sarner is described as having proactively taken on the important mantle of chairing the Institute’s Young Members Group. He has unflinchingly given of his spare time in underpinning this initiative, successfully bringing together a Working Committee, organising events and promoting the importance of networking within a cohort of young professionals in the security business sector.

Commenting on winning this prestigious award, James Sarner told Risk UK: “I’m honoured to have received such a prestigious award. Thank you to everyone for all your support. I’m very proud to be a member of The Security Institute and, in turn, part of such an important organisation in today’s security world. It has been a great experience working on the Young Members Group. May it continue to grow with much success.” 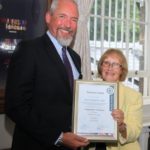 The President’s Award is a new accolade, with the nominee being proposed by the Institute’s Board of Directors. The recipient is deemed to be a professional who has made an exceptional contribution to the overall objectives of the organisation.

In the nomination for this award, Ken Livingstone is described as being a “significant and influential presence” within The Security Institute and a keen advocate of professionalism across the security business sector in general. Hands-on experience gained during his early career with the Royal Military Police combined with subsequent academic learning has enabled Ken to understand and educate many in how well security management works in a commercial environment. Ken has been the longest serving Board director in the history of The Security Institute. 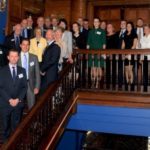 Andrew Nicholls, the Institute’s deputy chairman who was responsible for the management of the event, commented: “The Institute is a volunteer organisation which is dependent on the support of members who contribute towards its activities. We have a number of awards to make to individuals on an annual basis and have done for a number of years now, but this new event enables us to present all of our awards together in the presence of friends and family, making the occasion extra special for all those involved.”

**All of this year’s awards were bestowed in the presence of Baroness Henig CBE, President of The Security Institute, who presented the new President’s Award