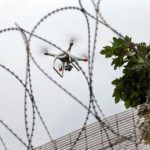 A Channel Islands prison has become the first in the world to use a new system designed to prevent drones from smuggling drugs, weapons and other contraband over perimeter walls. A group of British companies has collaborated to install a comprehensive perimeter protection package at Les Nicolles Prison on Guernsey.

That package includes the new ‘Sky Fence’ technology which creates a 600-metre shield around the prison to detect remote-controlled drones and then uses a series of ‘disruptors’ – ie sensors designed to jam drone computers – to block frequencies, control protocols and then divert drones back to where they originated from.

Drones have become a major security problem in Britain’s prisons and are increasingly used to smuggle in drugs, weapons, mobile phones and other valuables. As a result, the management team at Les Nicolles Prison ordered around 20 ‘disruptors’ on the perimeter fence line and within the jail.

Prisoner governor David Matthews explained: “This is the first time the technology has been used in any prison anywhere in the world. I would like to see it adopted in other UK prisons because security around drones has become a significant problem. This security solution is about prevention.”

Nottingham-based company Drone Defence has worked on the idea in the past year. Founder and CEO Richard Gill said: “Our solution disrupts the control network between the flyer and the drone. The drone then activates ‘Return to Home’ mode and it will fly back to the position where it had a signal with its flyer. Someone has described this as the final piece in a prison’s security puzzle. I think it could have a significant worldwide impact.”

The new system in Guernsey is part of a £1.7 million security upgrade that also includes new cameras, new fencing and sensors, a new lighting system and new alarms. A multi-use games area for prisoners has also been set out within the prison’s four walls.

Les Nicolles Prison is a mixed category prison which holds both men and women, young offenders and adults, and has a capacity of just 139. It opened in 1989 and, in recent years, its population has fallen to an all-time low. Les Nicolles is independent of the mainland prison and justice system and run by the State of Guernsey.