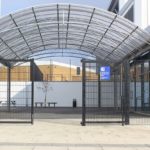 Educational facilities should be safe, secure and healthy environments that encourage learning and development. However, criminal activity can compromise these principles and, in turn, undermine the hard work of both teachers and students. Peter Jackson examines the security solutions that can be put in place to prevent harm from being perpetrated.

Only recently, an ITV News story revealed that pupils at a primary school in Leicestershire missed the first day of the new term after vandals broke in and caused thousands of pounds worth of damage. The wreckage ranged from broken windows to the destruction of furniture and play equipment.

The latest reported statistics show that there were 13,003 incidents of theft, burglary and robbery reported in schools in England, Wales and Northern Ireland in 2014, alongside 4,106 investigations into damage or acts of arson.

The price of repairing physical damage and replacing stolen equipment can have a significant bearing on a school’s budget. Indeed, financial restraints in UK schools are a big factor to consider when assessing the importance of adequate physical perimeter security. Recent announcements by Government ministers suggest that 5% of council schools and 4% of Academy Trusts have budget deficits, with the general secretary of the National Union of Teachers estimating that 92% of schools in England could face real terms budget cuts over the next four years.

In spite of these tight constraints, vandalism in Scottish schools, for example, cost the taxpayer over £1 million in repairs in 2015 and at least £4.5 million over the past five years.

These unplanned costs will generally mean that less money is available for important considerations such as recruiting personnel or improving building facilities and equipment.

There are also the non-financial impacts associated with these crimes that must be considered. The reputation of a given establishment, a fear of safety among members of staff, parents and students as well as the disruption caused to learning can all have long-term effects that may be hard to shake off.

A large number of people flow through educational sites on a daily basis making it a difficult task to keep track of crowds at particular locations. The lack of a formal security strategy for schools, coupled with the fact that we don’t employ security personnel at school sites, means that the use of physical security solutions including gates, fences and turnstiles is recommended.

For maximum effectiveness, physical security solutions should be supported by some means of electronic security equipment such as access control to effectively manage and limit movement within a site.

Initiatives such as Secured by Design provide several guidance documents that aim to reduce crime in the built environment. The latest advice to schools incorporates several new and improved security standards that have been developed to address emerging methods of criminal attack. The guide advocates a clear management and maintenance programme to ensure the permanency of any measures undertaken. Periodically assessing for risks and implementing solutions where necessary is a good way of making sure that a site is always meeting its Health and Safety obligations.

Developing a detailed school security policy that identifies the risks and puts controls in place to minimise harm to staff, pupils and visitors is vital. Procedures should also be in place to prevent security and safety breaches as well as to educate members of staff around them always being ‘security aware’.

Having visible physical measures and processes in place will help to protect against a range of threats and vulnerabilities. Public safety must remain at the top of the agenda to ensure the health and well-being of all individuals in and around the school site.

To this end, Building Regulations, Local Authority permits, Health and Safety and fire prevention requirements must be strictly adhered to and observed at all times.

To safely and effectively secure a school, college or university site, careful planning of the perimeter security is paramount. Educational facilities are often complex sites to secure, playing host to multiple buildings (each with their own access points), open spaces between those buildings, play areas and sports facilities as well as fields. Perimeter security solutions therefore need to integrate with the overall site architecture and, ultimately, aim to control the movement of people and vehicles through the use of solutions such as fences, gates, bollards and barriers.

It may be worth thinking about creating separate traffic routes for pedestrians and cars to make sure members of the public are safe during peak periods. A plan should also be put in place during quieter times in order to maintain a ‘security conscious’ approach.

Having an understanding of the land layout surrounding the site perimeter and its uses is also crucial as certain aspects may contribute to or otherwise assist in the perimeter being breached. By way of example, if the school or college is the neighbour of a pallet production company then the latter’s stock of pallets next to any school fence makes it easy for would-be intruders to use those pallets as a means of gaining illegal entry to the premises.

Alongside the various regulations to follow, consultation with local residents and neighbouring businesses is a vital aspect to think about as these parties can provide additional support that may well assist in preventing a perimeter breach.

When considering access points into and around an educational facility, it’s particularly important to understand and manage permissions for staff and students entering the site and prevent or control access for other individuals wishing to enter. Having clear signposting and designated areas for visitors including parents, local authority employees and suppliers, etc is key alongside supplementary measures such as a reception area or a sign-in procedure orchestrated to help establish the authenticity of a particular visit.

If for any reason an entrance is used to provide unrestricted access, it must be monitored in person by a member of staff so as to provide an initial deterrence.

With safety being the first priority, it may be worth considering locking down all entry points on the perimeter of a site during the day with access managed via a staffed reception. When combined with durable high security fencing, such a policy can not only help in denying potential criminals entry, but it can also prevent pupils in primary and secondary school-level education from leaving without permission.

Nowadays, most new schools are built in urban areas whereas existing ones are being bordered by new residential developments. In these cases, it’s important to consider the surrounding neighbours in regard to the noise created during the school day.

Acoustic fencing is suitable for ameliorating noise as it can be used to deflect external sound away from a school site as well as contain and absorb internal noises from high impact areas such as playgrounds. These solutions can work together to provide school users and neighbours alike with the optimum combination of privacy and security.

Sports fields and courts are another area within the school site that may require some defences in place to safeguard pupils and staff from harm and protect buildings from damage. Stray footballs, for example, can cause pain and injury to unsuspecting members of the public passing by and realise destruction in the form of smashed windows. Installing suitable fences and gates around these areas can help when it comes to preventing such occurrences from taking place.

Aesthetics is one more important factor. Creating a pleasant and welcoming appearance is a key element that helps with staff recruitment and retention, and also increases student productivity. Security solutions in secondary schools that feature bespoke elements such as incorporating the school’s logo and colours are also ideal as they can help develop a strong identity as well as a shared sense of loyalty among students and staff.

Primary schools, on the other hand, rely highly on bright colours and soft features in the playground to engage and aid pupil interaction. In this scenario, using timber fencing around the perimeter may be much more beneficial as it can be styled and decorated accordingly.

Ultimately, having the most appropriate solutions in the right places will help in creating a safe and secure teaching and learning environment which also benefits the local community. A good school security policy can undoubtedly assist in reducing incidences of anti-social behaviour, increase collaboration and cohesion in neighbourhoods and make an establishment more attractive to prospective staff and students alike.