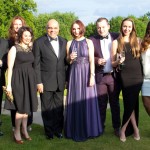 Leading security solutions providers Securitas and Axis Security have held their annual awards ceremonies at which outstanding members of the companies’ respective security teams were honoured for their continued efforts on behalf of end user customers.

This year’s Securitas Community Awards took place at the Forest of Arden Marriott Hotel and Country Club near Birmingham and, as always, were designed to recognise the outstanding work carried out by Securitas employees over the past year. The ceremony covers a number of categories, all of them based on performance and notable contributions to the community.

The finalists and winners of eleven categories were announced throughout the course of the evening, during which time all those in attendance were hugely impressed by stories of innovation, bravery and the aforementioned contributions to the community.

The 2015 Securitas Community Awards winners are as follows:

Speaking about the event, Securitas Country President Brian Riis Nielsen explained: “The annual Securitas Community Awards offer a rare chance to bring together our customers, partners and suppliers and celebrate the achievements of our people. I’m very proud of each and every one of them. The Community Awards also recognise that our officers are not simply chasing intruders but, in some cases, they’re actually saving lives. I believe it’s very important that we continue to highlight their endeavours which sometimes go far beyond the duties of a typical security officer.”

Also commenting on the 2015 Securitas Community Awards, the company’s chief operating officer Shaun Kennedy stated: “This is another great opportunity to recognise and reward our officers who go over and above the call of duty in delivering an excellent service for our customers. Those here tonight really should be proud of their achievements. I hope this year’s awards inspire even more officers in striving to become next year’s winners.”

In addition, the 2015 Good Customer Award – run in association with Risk UK – was presented to the University of Hertfordshire. This special accolade is designed to reward those customers who have contributed greatly to an improvement in standards and the perception of the security business sector in general.

Pleasingly, this prestigious Black Tie event raised £2,580 for the nominated charity, namely Wooden Spoon (the Children’s Charity of Rugby). This excellent charity is continually funding life-changing projects across the UK and Ireland that support disadvantaged and disabled children.

Axis Security recently celebrated the first class achievements and extraordinary efforts of its employees during the company’s seventh annual in-house awards ceremony, held at the Honourable Artillery Company in London. 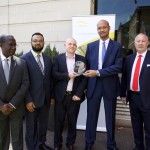 Three awards were bestowed: Security Employee of the Year, National Team of the Year and London Team of the Year. Each is designed to recognise and reward a strong work ethic, clear customer service skills and a thorough commitment to all aspects of the security role.

The Security Employee of the Year Award was won by Neil Wilcox – the security manager at Ark Data Centres – for his “above and beyond commitment”. Starting work as a security officer in 2010, early potential earned Wilcox a promotion to the role of supervisor and then again to his current position as security manager.

Wilcox now manages a 22-strong team of officers at Ark Data Centres in Farnborough, where his excellent customer service skills and wholly supportive management ethic – which encompasses the training of new security officers – are described as “first class”.

Chris Wisely, managing director at Axis Security, explained that the consistent hard work of the business’ employees is a hallmark of the service they provide.

“We’re all genuinely proud of the commitment of our teams and individuals who are a credit to themselves, our customers and our business,” enthused Wisely.