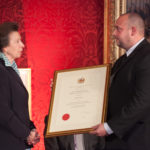 Mark Barber, Academy and qualifications design manager at Securitas UK, has been presented with the prestigious City & Guilds Highly Commended certificate by Her Royal Highness The Princess Royal at the annual Prince Philip Medal Ceremony, which was held at St James Palace on Thursday 8 June.

The Highly Commended certificate was introduced more than 50 years ago by the Institute’s former president, namely His Royal Highness The Duke of Edinburgh, and is specifically designed to honour those individuals who’ve achieved significant personal and professional success since completing their City & Guilds qualifications.

Specifically, the Prince Philip Medal celebrates those who’ve displayed outstanding individual achievement in the areas of science, technology and industrial development, or who’ve ably demonstrated “exceptional proficiency” when it comes to workplace skills.

Every year, three awards are presented: the Prince Philip Medal itself, the Highly Commended certificate and the President’s Award, the latter recognising exceptional teaching.

Barber has been honoured for his “exceptional contribution” to vocational education and training. He began his career as a door supervisor over 20 years ago and realised very early on that high-quality training and assessments were critically important, but also somewhat rare in the security sector. On that basis, Barber harnessed his wealth of knowledge and duly set about transforming security education and training.

Throughout his career, Barber has gathered a broad range of experience and expertise – from planning and managing the protection of a Saudi Arabian Royal Wedding through to designing evacuation and dignitary protection protocols involving Her Majesty The Queen.

Alongside this, Barber has also gained an impressive range of City & Guilds qualifications across the spheres of teaching, management and security and is affiliated with the Institution of Occupational Safety and Health.

Barber joined Securitas back in 2015 with a brief to transform training standards. Thanks to his insight and expertise, Securitas UK now has a purpose-built City & Guilds-accredited Academy in Milton Keynes, providing employees with industry-leading training and development opportunities.

Commenting on receiving the Highly Commended certificate, Barber stated: “Working with City & Guilds and Securitas UK, I’ve been given the opportunity to expand the skill sets of many colleagues in the security industry, in turn helping to afford them the formal recognition they deserve. This in itself is hugely rewarding.”

Chris Jones, CEO of the City & Guilds Group, added: “Mark’s dedication to vocational education and training within the security industry is outstanding.”

The City & Guilds Group’s purpose is to help people, organisations and economies develop their skills for growth. Backed by a Royal Charter, the City & Guilds Group has more than 135 years’ experience in making sure that individuals are prepared to contribute to successful businesses and thriving economies. The Group partners with more than 200 companies to develop the skilled workforces required and invests in learning technologies to help people on the road towards extensive education.

Securitas is to be awarded the Royal Society for the Prevention of Accidents (RoSPA) President’s Award for outstanding performance in Health and Safety in the Workplace. The award will be presented at the Hilton Birmingham Metropolitan Hotel on Thursday 13 July.

Securitas UK has won the RoSPA Health and Safety Award for 11 consecutive years now. Winning the President’s Award in 2017 recognises this significant achievement.

“RoSPA has long been recognised as the leading Health and Safety charity within the UK,” urged Thomas. “The organisation’s awards scheme sets a demanding benchmark to which organisations can aspire. At Securitas, we actively promote safe and secure working environments so we’re enormously proud to win our second President’s Award. This firmly establishes us as a leading force in the security industry for Health and Safety excellence.”

Julia Small, head of awards and events at RoSPA, said: “The RoSPA Awards are the most prestigious in the world when it comes to occupational Health and Safety. Winning a President’s Award demonstrates an organisation’s commitment to maintaining an excellent Health and Safety record. Achieving the standard required is no mean feat.”